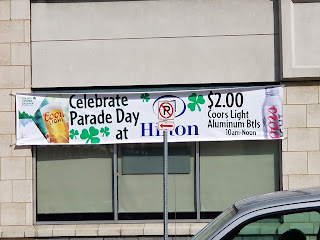 ...is on Saturday, March 9th.  Nothing says "Family Friendly Event" quite like people getting drunk at 10am.  For the record, it's 10am because many years ago the local District Attorney had to request that bar owners not start to serve alcohol in the 7-8am range.


Just to get it out of the way, I basically don't drink alcohol.  I may have a glass of champagne on a special occasion, but that's about it.  That noted I'm not anti-drinking; the feeling of being drunk and then hung-over just doesn't appeal to me.  None of that's really relevant here though, because the real issue I have with the Scranton St. Patrick's Day Parade is the notion that it's touted as a "Family Friendly" event.  It's not.

I know people who enjoy the parade and related activities, and for them, the good out-weights the bad.  Let's just be honest about parade day though:  It's disproportionately about alcohol consumption.  For some that borders on cute.  For the guy who almost got run over by a pickup truck as he drunkenly waltzed down Mulberry Stree?  Maybe not so much.

If you're going to the parade next Saturday, well, enjoy yourself and be careful out there.  As I have advised out of town visitors coming for the parade, watch where you step, because you never know what (or who) may be in the gutter in front of you.

Created By Stephen Albert at 1:59 PM

Email ThisBlogThis!Share to TwitterShare to FacebookShare to Pinterest
Labels: Scranton