As Irish as Paddy's Pig

When my daughters were younger, I used to tell them that everyone but them was Irish on St. Patrick's Day.  They knew that wasn't true, by the way, mostly because their great-grandmother was about as Irish as Paddy's pig.  Part of that was just a Dad trying to be a smart-alec.  That part they got, all too well.  Another part of it was the fact that, for a variety of reasons, I just wasn't really all that fond of being any part Irish.  I know, that's an unpopular thing to say in these parts, but growing up was tough (side note, you can read another growing up story, this time about my wife, HERE), and there just wasn't all that much to be proud of, Irish or not.

Fast forward to the present, and thanks to the miracle of modern genomic testing, well, I might have been really lying to my kids. 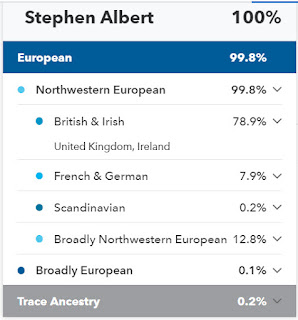 Now there is a bit of face-saving here in the fact that I also have a strong genetic link to England, specifically London...

The testing, at this stage, can't tell the difference between the British and Irish parts of my genetic code.  I know, that probably sounds like blasphemy to any green-blooded Irishman, but this stuff gets more sophisticated all the time, so who knows what they will be able to tell me in the future.

As a kind of final note, I do read where some folks have concerns about their genetic data being used by pharmaceutical companies and law enforcement.  To that I offer I following:  I don't really care.  Well, I do care in a positive sort of way in that if my bits-n-pieces of genetic data can be used to help identify disease treatments, well, I'm all in.  As for law enforcement, well, last time I checked getting in fights with your siblings wasn't something that was prosecuted using DNA evidence, so call me unconcerned at this stage.
Created By Stephen Albert at 2:30 PM

Email ThisBlogThis!Share to TwitterShare to FacebookShare to Pinterest
Labels: Family, Me, Miscellaneous