I don't advertise any products on this website.  Now the stated reason for that policy is that I don't want to ever be in a position to seemingly endorse something by proxy.  Sounds nice and haughty, doesn't it?  One of the other (a.k.a. the "real") reasons is that I just can't be bothered setting things up, monitoring advertisements, etc.  I'm just not that ambitious for what that could ever possibly yield me in terms of money.  Regardless of the reason though, know for a fact that when I do suggest something, well, it's worth it.  That brings me to two books. 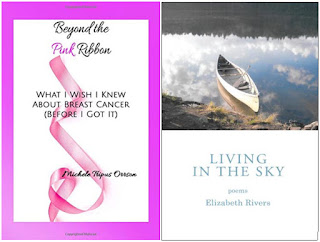 Beyond the Pink Ribbon
by Michele Orrson

You can read Michele's announcement about the book HERE on her blog.  By the way, I actually interviewed Michele for this blog in 2014; that posting can be found HERE.

I've known Michele for a long time.  We both started at our mutual (former) employer at around the same time and coincidentally ended up becoming surprised mock-retirees (we're both too young to be "actual" retirees) within a year or so of each other.  The word "smart" doesn't even begin to describe Michele.  I remember being in meeting with Michele back in the 1990s thinking "oh crap, I guess I need to be on my A-game because she's too smart to pull a fast one on...".

Michele has a compelling story from a health and life perspective, and I'm glad to say that I own 4 copies of Beyond the Pink Ribbon myself.  You should own a copy or two as well. 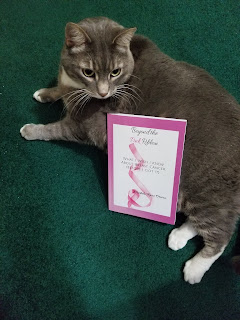 (Beyond the Pink Ribbon is also endorsed by my cat, Jean Luc)


Living in the Sky
by Elizabeth Rivers

As if being a poet laureate and producer of one of my favorite people in the whole world wasn't enough, Liz is also my partner for an annual hike up to Ricketts Glen State Park. 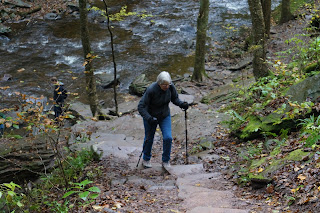 If you're not impressed by the whole "hike up to Ricketts Glen" then you've obviously never been there yourself.  You will, however, be impressed by her writing.

You can read more about Liz Rivers HERE.  You can buy her most recent book HERE.