A personal indulgence, of sorts:  Today is my (older) brother's 55th birthday.  That's a mighty large number of orbits around the sun, and I'm only a year and a few months behind him.  It wasn't always the greatest growing up, but heck, we made it anyway. 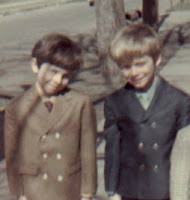 Due to an unfortunate series of events that have been long forgotten, we were in the same grades for most of our primary and secondary educational experiences.  That's both a blessing and a curse, but yet all these years we still talk to each other, rather frequently I'll add.  It's also important, given that the world's supply of Albert brothers was been diminished over the past year or so.

Created By Stephen Albert at 10:53 PM