I told myself that I wouldn't be one of "those people" who seem to perpetually be in mourning.  I'm hoping to keep that promise, if for no other reason than the fact that I don't think I've really gotten to the actual "mourning" stage.  Yet.  Maybe not ever.  I refer to my younger brother Chris.

I will say, at the risk of sounding really weird(1), I've actually sort of experienced him in a few dreams over the past year. Granted, my dreams(2) play out like something out of a bad Dr. Hunter S. Thompson ether-binge lubricated acid trip.  Seriously, they really do, but with my brother Chris sometimes playing a kind of supporting role.  These dreams are never, as I can recall, about him by the way; he just sort of appears in them.  I'm told that there is a deeper meaning to these events, but I've yet to actually figure out that part.  Again, maybe not ever.

As a side note, I don't ever recall ever having a dream in past where one of my brothers was a participant.  It's a heck of a way to get a part in some surreal show playing in my slumber-bound subconsciousness.

Anyway, and to the point, it was a year ago on January 5th that I found my brother in his home.  We don't know the actual date he passed, other than it had likely been a day or three beforehand.  The fact that his home was a balmy 20 or so degrees when I found him complicated matters in that regard.  What I do know, and what I've noted before, is that while no one wants to be the one who actually finds a deceased family member, I continue to be grateful that it was me, and not one of my other brothers, Chris' wife, his daughter or really anyone else.  Chris, I think, always appreciated that I seemed to have my "stuff" together(3), so maybe this was some kind of karmic duty I was performing.

So what to make of this?  I don't really know.  For me, the process of unpacking emotional baggage is a long one, filled with procrastination. Part of me simply doesn't want to unpack this emotional baggage, in part because it's very, very difficult.  While I'm not one to back down from something simply because it's hard, I'm also not one for intentionally sticking a figurative icepick in my brain either.  "Hard", it seems, is a relative term.  Maybe, and more honestly, I'm still having difficulty processing the fact that I lost my brother, someone I genuinely was counting on to be there when we got older...someone who, as I've noted before...would be able to help me understand our common upbringing, hopefully working to make sense of stuff that, as kids, we really were not equipped to understand.

For the record, I'm not sure about an afterlife, but if there is one, he'll be there waiting for me one day (long into the future, if I have anything to say about it), smiling, ready with a midget joke. 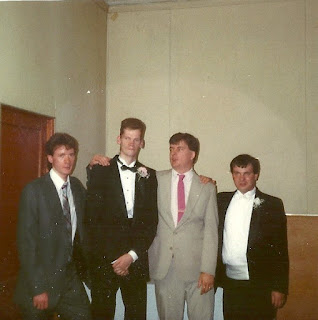 (Not quite the Corleone Brothers...Chris, Joe, Steve & Rich)

My brother was very fond of The Doors, so in my best Casey Kasem imitation, "here is the long-distance dedication".


(1) But let's face it:  If you read this stuff long enough, you've already come to the conclusion that I really am weird anyway.  I'm okay with that, for the official record.
(2) Maybe like others?  I don't know...as I only experience my own anyway.
(3) Mostly theatrics, I will note.
Created By Stephen Albert at 10:20 PM