Election Day...Today is election day and I do hope that one and all went out to vote.  Too many people have fought and died for our rights, including the right decide who will represent us.  This is very serious stuff, even if some of the candidates aren't.

Speaking of election results, you can see them (for NEPA) HERE.


Doctor Appointment...Well it was back to the good Doctor McKenna today to get my blood pressure and lungs checked.  Joy!  For the past 10 years I have been fighting a battle to keep my borderline blood pressure in check, and although I am still hopeful that I can dodge yet another bullet, I also know that the day will probably come when I have to acquiesce to the inevitable fact of medication.  On the good news side, I lost two pounds and my lungs sound excellent.  To the latter, I will note that my doctor did ask "do you still have the cat?".  My answer is noted directly below... 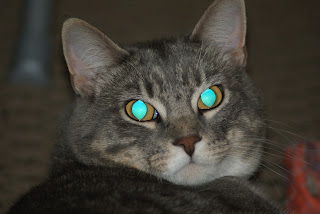 In other health news, I am finally getting up to a decent amount of time on the new, medieval torture device of an elliptical machine we have in the fitness center at work.  With the old machine I could easily do 40 minutes; with this new machine I am thrilled to knock out 15.  For the record I am also putting in 30 minutes on the stationary bike as well.

Newt...Not the amphibian type, but rather the thrice married variety.  Anyway, the Daily Beast is reporting that Newt will exit...errrr suspend...not really quit but not keep campaigning...the GOP nomination race.  I have never really thought that Newt was in this for the win, if for no other reason than the fact that his campaign seemed sloppy and disorganized, which is odd given his experience in politics.  Me?  I think he has been in it to either sell books, or keep Callista busy.  Who knows.

Faux News...As the George Zimmerman trial approaches, look for a slew of "white guy beaten up as revenge for Trevon Martin shooting" stories on Fox News.  Count on it.  In fact they will probably fill the space that would have been occupied by "Rupert illegal wiretap" stories.  The folks at Faux are nothing if not predictable.

Walmart Follies...Speaking of things to look for in the news & predictions, look for Walmart to take a pounding over the next year related to very well founded allegations of bribery in Mexico.  This will not end well for Walmart.  The US Government takes a dim view of foreign corrupt practices by U.S. businesses; hell, they even have a law against it.  What's more, the Feds are far more lenient when there is self-disclosure...in this case, it was New York Times disclosure.  As they say in Spanish...malo.

Created By Stephen Albert at 9:56 PM