From the Pennsyltucky File

Over the past year or so, Ms Rivers and I have made a trek to Cabelas, which in addition to having...

...and some very nice clothing, has the ability to outfit your entire life in camo.  See below, with apologies for the pathetic ability to my Palm Pre to take decent pictures. 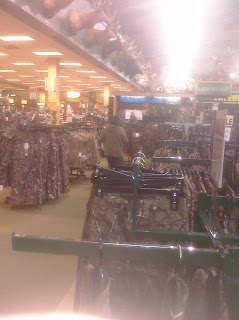 You want camo pants?  Hell, I think they even have camo business suits. 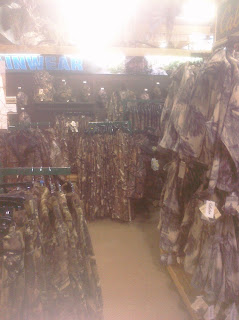 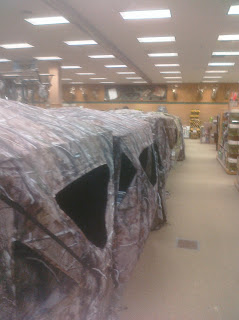 Please don't take my lame-arsed attempt at humor to be in any way critical.  Heck, I even own a pair of camo shorts.  Instead, I think it's pretty fascinating how this kind of life-style is so well accepted in Pennsylvania, which really is far more a rural than an urban state.  Growing up in a housing project in Scranton I was never exposed to this kind of thing, ever.  Case in point:  I think I was 40 when I first got to shoot an actual, real gun (several actually, all involving real bullets).  Anyway, while I will never be a hunter...I really don't like the notion of killing things (well maybe except for house centipedes)...I do really, truly appreciate all that hunters have done for the greater outdoors in Pennsylvania.  Yes, while groups like the Sierra Club certainly do good work, I suspect that it's hunters and hunting supported groups that have contributed the most to ensuring that there are plenty of outdoor places for all of us to enjoy.

There is a bigger lesson in all this silliness.  As a non-hunting person, it is important that I acknowledge that people who think differently than I do can never the less have goals in some areas that are similar to my own.  Forget just hunting, as it is this way in life in general:  we can disagree about some things in life, but still seek common ground in the others.  Now if only some in government could learn this simple lesson.
Created By Stephen Albert at 11:22 AM