Apologists for the Confederacy

Recently received anonymous comment on my posting Celebrating the Confederacy, the text of which is noted directly below.

"I have news for you there guy, I am from the South and I sure done appreciate you comparing my ancestors to Nazis, I don't know if your tracking but Hitler was all set for the purification of the people and making the perfect race and with that to achieve world domination now tell me again how the Confederacy and the Nazis are the same? try and get your facts straight before posting ignorant stuff on the Internet where you can offend more people that the people that will agree with you we people from the south still have our Southern Pride that doesn't make us racist so like my Father always said think before you speak because you just make yourself look more ignorant" 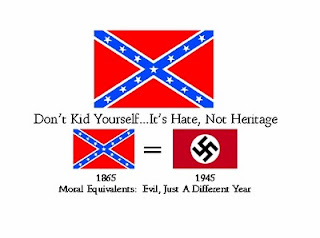 A few points in retort:

Created By Stephen Albert at 9:43 AM

no it not u negger lover

no its not you nigger lover

FIRST BLACK REGIMENT IN NORTH AMERICA FORMED OF FREE BLACKS WAS IN THE CONFEDERACY! THEY VOLUNTEERED TO FIGHT THE UNION! NOTHING MORE NEED TO BE SAID THAN THAT! AGAINST IMPERIALIST FEDERAL IDEAS!

This is not how it was at all. And people belive what the government tells the teachers to teach the kids because they know that if they tell the truth about it the blacks will do what they did in the 60s except in todays world there is no peaceful protest we would end up like syria gunning down in the streets and killing randomly. The truth about the war was both sides had slaves thats true period. The north had as much if not MORE than the south. The ones in the south who owned slaves consisted of the large plantation owners who had 100-150 slaves those were the ones who were poor to them ( beating etc) the other 80% of the southern population didnt even know who had slaves or why or where it happend or why they were mostly subsistent farming and if they owned slaves( which most did not because of how expensive they were) they maybe owned 1 or 2 and treated them just like they would their own friends because why would you pay 1000 in the poor southern economy then beat it and choke it and all that fake crap they show on tv shows. The ones who were cruel to the slaves were the large plantation owners and those who sold slaves. But the ones who bought slaves just thought of it as an extra farm hand and they were thankful to the slave(s) they had and treated them well. I mean do you really think that they would beat the only 1000( which was the average cost of a slave in the 1860's) dollar slave they had and beat it to the point they couldnt work their best. that makes no sense and you know it. A normal southern family would be lucky ever to own one.

You have it wrong my friend. The Nazi regime was created to destroy, the Confederacy was created what they thought was right. Although they were wrong, they believed they were defending their way of life. We used to promote cigarettes and tobacco throughout the 20th century, does that make our current U.S. comparable to Nazi's? Knowingly killing numerous people all for profit.
The Emancipation Proclomation did not free the slaves, it only released them in Confederate States. It was a ploy by Lincoln to manipulate blacks into joining the Union and gain international support against the Confederacy. If freeing the slaves was the genuine concern, why were there no support systems put in place in 1865? Instead we just said "okay you are free go be" to a whole group of people we brought here, enslaved, denied education to, then expected them to just go be free and prosper. This country, Confederate and Union was guilty of the crimes of slavery and blood hadw to be shed it cause change and pay for those sins. However, don't vilify the Confederate Flag. 90% of those who fought in the CSA didn't own slaves. If the South was so bad why are we not stopping slavery on other continents? Genocide is worse than slavery but it continues daily. Many in the south just knew the big evil government was invading their land and they wanted to defend it, a normal reaction for any invaded territory. Our troops were sent to Iraq for wrong reasons, but they are no less honorable men. I fly the Confederate Flag on certain days in honor of those who died. You have to have two sides to a war. If the Confederacy is the face of evil then what does that make us as a country since 1865? Come to my home of Detroit, MI and I will you areas of real evil to blog about.