Sunday Writing...Okay, I am planning on rambling and writing, writing and rambling.  This wasn't my original plan for this next posting, but like most "best laid plans", what I've thought about writing and what I am actually going to write about are two completely different things.  Good thing that this whole thing is for my enjoyment anyway.

Rental Cars...I'm traveling to Hartford tomorrow, and as I picked up my rental car this evening I was pleasantly greeted by a Nissan Altima. Score!  No Chevy Impala!  Now I have nothing really against the Impala, well except for the fact that it's rather boring.  On the plus side, the Chevy does have a large gas tank that can make the Hartford round-trip without a re-fill.  I also like the standard Chevy radio.  The handling though on the Chevy is very nondescript.  Not sporty.  Not luxury.  Just, well, rental car.  The Nissan though (and I've rented Nissan's before) handles extremely well.  Very quick, great steering and the cruising range is enormous...even longer than that of the Chevy.

Titanic...If you are even casually interested in the Titanic disaster, then you have to check out the current edition of National Geographic.

Ken Smith for State Representative...If you live in NEPA and are in the district of representative Ken Smith, then make sure you read THIS article.  Ken Smith is a nice guy, that's for sure.  But "nice guy" isn't in and of itself a qualification for legislative service.  The reality is that someone who is incapable of managing his own (and that of his business) finances is not capable of managing the public's finances.  Period.  Vote for Kevin Haggerty week after next.

Observatory...Ms Rivers and I visited the Thomas Cupillari Observatory at Keystone College this past weekend.  It was a very, very cool experience.  For all my science geek-i-ness, I've never been to an observatory before.  I got to see spectacular views of Venus, Mars, and Saturn.  I also saw a few star clusters, two binary star systems and a trinary star system. 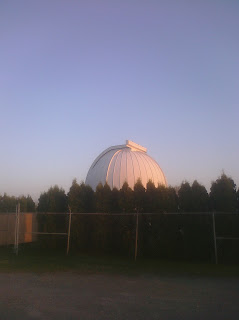 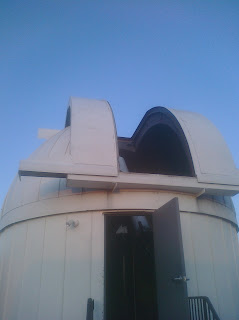 The view of Saturn alone was worth the drive.  This place is a hidden gem for residents of NEPA.

Created By Stephen Albert at 10:15 PM