Who Is Harry Nilsson? (And Why Is Everybody Talkin' About Him) 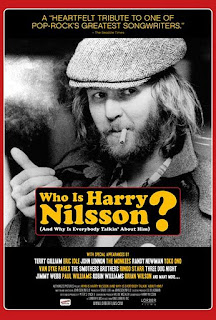 As I may have mentioned a week or so ago, I purchased a DVD on the life of Harry Nilsson, which I finally got around to watching Sunday night.

My overall impression?  If you are a fan of Harry, or of the music of the late 60's/early 70's, then I'd suggest you check this out.  The DVD is long for someone who actually had a relatively short career in the spotlight, but it held my attention for all of two hours it played.  I do confess to pausing at about the one hour mark for some popcorn though.

The basic story of Harry Nilsson is really rather compelling.  Here is a guy who was enormously talented.  He played multiple instruments, wrote terrific songs, and had one of the most incredible singing voices of all time, bar none.  Want some evidence?


Interestingly enough, Without You is a song that Harry didn't write (it was actually written by a member of the band Badfinger).  Regardless, I think this is something of a signature piece for him, along with Everybody's Talking.  I don't know of another current musical "artist" that can sing like Harry; hell 90% of what you hear in modern popular music is acoustically altered using auto-tune or some of other computer magic.

As for the man, this is something incredibly tragic about someone born with so much talent...that works so hard to get noticed and becomes successful at their craft...and then becomes intent on destroying that which made him so successful.  Yet later in life Harry seemed to become grounded and by all appearances died while personally very happy, surrounded by his family.

This is a great, all be it very sad at times, story.
Created By Stephen Albert at 7:32 AM