Summer...precisely where has the summer gone?  It seems like May was just about a week ago, now the first week of August is almost over with.  Hell, it could be snowing in 4 months.  I think it all goes to prove that time is a relative...rather than a constant...concept.  When I was a kid time seemed to move very slowly.  Now days it seems to race by.

Mitt Romney...has apparently snagged a gi-normous campaign contribution from a company that existed just to give him a gi-normous contribution.  Score!  Dan wrote about this on NEPArtisan (see THIS link), but I think this is also a very interesting example of how "fair and balanced" Fox News really is these days.  This is a worthy story, but yet while it was breaking yesterday there wasn't so much as a mention of it on foxnews.com.  Not a peep.  Why?  Every time George Soros gives that kind of money to a left-leaning organization Fox News reports on it as if it here the second coming.  However since this was money that benefited a Republican it doesn't warrant coverage?  Things that make you go hmmmmmm.  My personal take?  This is another example of the distortion of free speech by the Supreme Court.  If you buy the argument that campaign contributions are a form of free speech, then you also MUST buy the argument that some folks have MORE of a right to free speech than others (because they have MORE money).

Congress...now has an all time low approval rating at something 82% disapproving of its performance. This of course makes we wonder who the bozos are in the 18% that think they are doing a good job.  My own member of Congress, Rep. Barletta, seems only capable of speaking in sound-bytes.  What a shame.  The job of members of Congress has changed from doing the "people's business" to "staying in office".  Maybe term limits are not such a bad thing.  We need to change the culture in Washington DC away from self-interest and towards common interest.  Note the word "common".  The interests of, for example, the Tea Party are not, by and large, my interests, so I don't expect that their agenda should rule the day.  Same thing goes for other groups as well on both the right and the left.  It's time we end this bull$hit notion that compromise and working together are somehow bad.  We pay these people to get stuff done, so it's about time they started to perform, and not just for their particular pet constituency.

College...I have two daughters now in college and just about the most difficult thing a parent has to deal with lies in navigating the whole "paying for college" stuff.  It's mind-boggling.  It is also incredibly stressful for me, as I am not always the most patient person in the world when it comes to getting answers from banks, college financial aid offices and the like.  I will say this though:  I've had to deal with both public and private universities over the years, and hands down the private schools (in my case the University of Scranton) are FAR BETTER in the arena of helping parents and students figure this stuff out.  Hands down, no contest.  It can be down-right difficult to even get in touch with someone from the financial aid office at a public university, let alone actually actually get meaningful assistance.

Eckley Miners Village...I had a chance to visit the Eckley Miners Village this week and I was really impressed, even though parts of it were under construction (work to preserve some of the hell-holes that our immigrant forefathers lived in).  This place is a treasure and is well worth a visit. 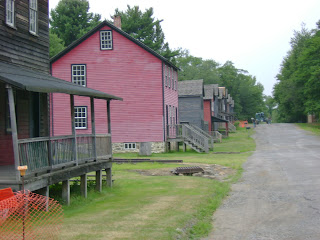 The song in my head...at the moment happens to be the greatest song ever written about someone obsessed by a news anchor.  I am referring, of course, to Turn It On Again by Genesis.  Here's to getting turned on again...

You gotta love Phil Collins doing the "one, two, three, four" at the beginning of the song.
Created By Stephen Albert at 7:54 AM