Today is my last full day in Maine, with an extended return trip home in the offing for Saturday & Sunday.  Actual touch-down in Scranton will come on Monday.  From there it is actually a short week, with Friday being a day off to take my youngest daughter to college.  The timing couldn't be better actually in that I've had more than enough time for resting, relaxation and contemplation this week, all in preparation for one of those big things that parents do in their lives, namely send their children off to fend for themselves for the first time.  Well, in a "kinda-sorta" way, if you consider being off at college "fending for one self".

Ah the timing of it all.

The timing of these events reminds me that I don't consider the universe to be governed in exquisite detail by some old white guy sitting on a cloud.  I guess that's another way in which Texas governor Rick Perry and I will part ways (well that and the notion...I suspect...that he feels the universe is 4,000 years old), but so I digress.  Not to piss off the Atheists out there, but I also don't think that all of this is the result of some random collision between two molecules either.  The very fact that I can ponder these very questions makes me believe that there is far more to the universe than simple bio-chemical reactions and random chance.  Anyway, one bit of evidence that seems to point to there being "something more" out there lies in how things in our lives just seem to fall into place.

I have not lived some  life of grand luxury, a-la the drunken Kennedy family, being given all the world has to offer on some kind of silver platter.  I have not always been what one would call "fortunate" in the most economic and social sorts of ways.  I have not been predisposed to great interpersonal relationships throughout my life.  Yet I also have experienced many things where, at that moment, I would have gladly traded in a kidney just to alter my fate, but yet in hindsight all of those "things" seem to have happened at the right time for the right reasons, always resulting in a better long-term outcome.  Being a good American I loathe short-term pain in exchange for long-term gain.  Yet I have had so many instances of "short-term pain, long-term gain" that it's hard to believe that it's all just some meaningless bio-chemical illusion.

Has everything in my life been engineered in perfect detail by some omnipotent deity?  I'm think not.  Best guess on my part is that we are set off in life with a series of talents & gifts, and we are pretty much left alone to use them as we see fit.  Every once in a while in our lives there seems to be something of a nudge on the part of something out there in the universe to ever-so-slightly change our course.  Some of those changes seem needlessly cruel...at the moment...and I suspect that some of the changes end up costing us our lives.  In the end though I think we are given the opportunity to take whatever is thrown our way in life an turn it into something better...better for ourselves and sometimes better for others as well.

Yes, this tirade on religion and philosophy has been brought to you, via Steve Albert, by the State of Maine, which wants to you know that cool morning mist and harbor views are conducive to deep thoughts at any stage in life. 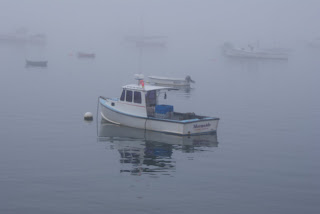 Created By Stephen Albert at 8:52 AM

Email ThisBlogThis!Share to TwitterShare to FacebookShare to Pinterest
Labels: Me. Deep Thoughts, Religion