It's barely 8am as I sit here at the official blogging patio in Maine, watching a Mourning Dove peck at the ground in front of me.  He/she had better be careful, as that big Maine Coon is no doubt wandering around the grounds.  Well maybe given that it is relative cool out now (high 50's) and there is a mist in the air the cat has opted to somewhat dryer and warmer surroundings.  Having all that fur might be a problem to dry out, not unlike Bon Jovi, circa 1989.  My "inner Beavis" is right at this moment going "hehehe, Bon Jovi is a hair band, hehehehe".

So far I've managed to reference a dove, a cat, a hair-metal band singer and Beavis, all in an opening paragraph.  Yes, that sounds about right.  Easily distracted?  You bet!

It occurs to me that while on vacation there is this kind of time dilation occurring whereby the passage of minutes, hours and days is different for me in Maine than it is for others in the rest of the world.  In fact is seems that a week has actually passed in the space of two days.  Now I do know that, in the absence of an extremely strong source gravity...something so strong that it could warp space/time...this isn't actually true, but it certainly seems so.  I think the far less geeky and more practical explanation  for my change in the perception of time lies in the fact that the old familiar markers of the hours, days & minutes simply aren't here at the moment for me.  I don't have those sign-posts of routine that tell me events are occurring in the "normal" flow of stuff in my life.  This is a good thing.  This is, in some respects, the kind of mental re-set that one needs to occur during something called a vacation.

Next to time seeming to flow differently the other big thing occurring in my perception centers has to do with the subject of guilt.  Not a pleasant one, and no, I am not overcome by it in any way, shape or form.  But I do seek to understand it better. As I have noted no doubt  before, having grown up Catholic, guilt is this seemingly all-powerful force that those similar to me were subjected to at an almost constant rate.  Guilt ceased to be something that helped to steer a moral compass and instead become this mental governor of a sort, one that prevents you from going further.  Put another way, my sense is that guilt should be the judicial branch of your own personal government, but for many of us it also became the legislative (deciding what we do) and executive (deciding how we do it) branches as well.  It ceased being a check and balance and became a entity into itself, one that now needs to be checked and balanced.

Better understanding guilt is one of the things I hoped to achieve during this Maine trip.  I did bring along a book as a kind of study guild, but mainly I think understanding stuff like guilt requires that someone just spend quality time thinking.  Actually the flow is one of "think, read, think some more, read some more and eventually maybe talk about stuff", which seems to work for me.  As already noted, while I am not overcome by guilt I do realize that an incorrect understanding of it has been a corrosive force in my life.  What better place on Earth to ponder and understand than Maine in August?

Today there will be more pondering and understanding, but there will also be a trek to the Atlantic coast as well.  At the moment I am at Southwest Harbor, but the shore seems to only be a few miles away. 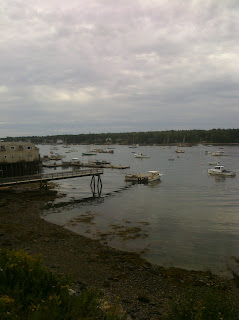 Here's to damp mornings, doves, fluffy cats, our inner-Beavis and better understanding the proper role of guilt in our lives.
Created By Stephen Albert at 8:43 AM