Preface
I love the sound of the Italian language, so what better way to end a series of blog postings than in Italian?  Speaking of “La fine”, I’m going to end up writing this in pieces over two days, with the result no doubt being something that is rather disjointed (or should I say “more disjointed than usual”?).  For that I will say “Mi dispiace”.
****************
“What lies behind us and what lies ahead of us are tiny matters compared to what lives within us.”
-          Henry David Thoreau
Thoreau, for me, is a lot like Italy…the younger I was the less I “got” it; the older I have become the more I understand just what all the fuss is about.  As I sit here thinking about the week that was, contemplating just how this was intended to be a time and place for great contemplation, the more I realize that Thoreau was absolutely right.  Now translating revelations, even of the minor sort, into reality is easier said than done.  That isn’t to say though that I haven’t learned many things over the past week.  Here are a few, just for starters:
Guilt
I thought a lot about guilt.  I even finished reading a book about guilt.  Do I feel guilty? Should I feel guilty?  Well the answers are “sometimes” and “mostly not”, in that order.  What’s important though about this particular topic is that I do realize now just how corrosive a force guilt can be.  Even more important, I now actively question many of the feelings I have taken for granted over the years.  Now in fairness, I’m not claiming that a week in Maine will cure excessive guilt, but I am going to claim that thoughtful study and introspection will almost always lead to the same conclusion when it comes to guilt.  That conclusion?  Well it’s that we all shouldn’t feel guilty about putting ourselves and our needs first sometimes.  Illogical selflessness is seldom actually selfless if you think about it, because in an effort to blindly please others, are we not actually just trying to make ourselves feel good?  Is that actually a selfless act?  I think not!  Yes, feeling guilty has a proper place, but that place shouldn’t come about as a result of someone else trying to manipulate or control our behavior…even if that attempt is not consciously made (but especially if it is).
Simplicity
Since about December I have made something of a conscious effort to simplify my life.  It has, in a very real sense, become something of a mantra to me:  I want to live a simpler, more honest life.  The Maine connection is actually pretty direct here:  there is nothing that screams the beauty of simplicity than, for example, fog in a harbor.  The fog just seems to happen, it doesn’t seem to over-think whether or not it should roll in or how rolling in will somehow impact something else. Life, like fog in a harbor, just happens. 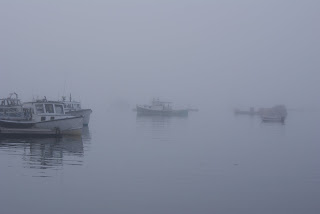 Kindness
I was shown tremendous kindness on this trip.  I have intentionally left out many of the logistical details of the trip to protect those who may not wish to be drawn into my own personal vortex, but I will note that for all of the week (Sunday to Saturday) I was the guest of a family where parents were celebrating a 50th anniversary.  They didn’t have to invite me, but they did, and I was made to feel at home at every opportunity.  It has been difficult, of sorts, for me in the past to be the recipient of things.  As I noted during the week, my lot in life so far has been that of the “provider”; now I wasn’t providing much but instead was the recipient from others.  That has been something of an instructional order for me:  I accepted the kindness of others and I didn’t feel guilty about it.
Challenges
I know I have more than my share of challenges ahead, and some of them relate very directly to challenges in the past.  I spent more than a fair amount of time thinking about some of them during the week, but as Thoreau notes, those things…be they past or future…really aren’t as important as what lies within me.  I need to practice.  I need to work on me.  I need to continue to grow as a person, in perpetuity, until the day I die.  Growth is essential because the challenges are not going to go away, and while I can’t stop them, I can improve my ability to deal with them.
Everyone Has a Story
I learned that everyone has a story.  As singer/songwriter David Gates noted in the song “Been Too Long On the Road”…
“Always looks so good on the outside”
…and I believed that somehow my life of fortune and misfortune has been unique.  I believed that other folks, well, they had “normal” lives.  I was wrong.  I was very, very wrong.  Yes, my personal story has its own unique set of twists and turns, but so too do the stories of everyone else.  We all have stories and that’s okay.  In fact, this is something almost worth celebrating in that it is such a revelation.  Not that this particular revelation all of a sudden came over me, but rather this particular road apple of wisdom has been building over time, and was most definitely solidified over this past week.  In a bizarre sort of way, I feel less threatened, less alone.  I can revel in being part of the “us” collective of dysfunction of stead of the solitary “them” who feel all alone in solitary dysfunction.
I know that people throw around terms like “life changing” all the time, and that in some respects the over-use of the term can be annoying at best.  Never the less this past week was life-changing for me.  Maine is this place of simple beauty where your thoughts can clear just as the fog clears from the harbor.  No, my life is far from perfect, and yes I have a lot of work to do yet (see above), but I walk away from the week a better person than I was at the beginning of the week.  This is a very good thing.
Grazie
In sincere gratitude I want to thank the extended Rivers clan for their hospitality over the past week.  The entire family was so much more than just kind to me, in both big things and in small, and for all I am eternally grateful.
Created By Stephen Albert at 9:03 PM