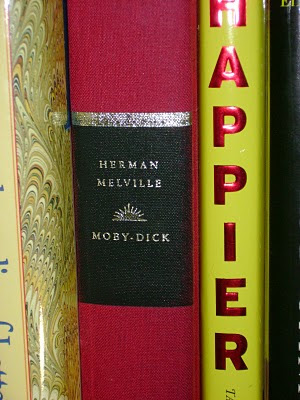 "He piled upon the whale's white hump the sum of all the general rage and hate felt by his whole race from Adam down; and then, as if his chest had been a mortar, he burst his hot heart's shell upon it."


I typed the above quote having a very fancy copy of Moby Dick sitting on my bookshelf, but actually I have to confess that it comes to mind whenever I think of the Star Trek movie "First Contact". You can see a clip from the movie where the quote is uttered HERE. I love the quote and the way it's woven into the movie. For those who are not familiar with Star Trek in general or this movie specifically, First Contact basically deals in large part with how Captain Picard reacts when confronts a foe that did him harm in years past. His actions are largely driven by revenge, a motive that he himself isn't aware of until nearly the end of the movie, when someone points it out to him. That's a hallmark of great science fiction in general (and Star Trek in particular): the ships and aliens are simply a vehicle to tell a larger story dealing with an underlying moral theme.

Anyway, so what the hell does any of the above have to do with Scranton politics? Read on.

For years Scranton's unionized public safety employees have been locked in a battle with Mayor Chris Doherty over wages and benefits. The details are mind numbing, but suffice to say he wants less and they want more. Fair enough. One of the outcomes of this epic struggle has been the fact that these employees have not seen a raise in "umpteen" years (where "umpteen" = a lot). You could say that they are upset. What to do? Well they are of course engaged in the requisite legal battles with the Mayor, but they also have another line of attack in the guise of City Council President Janet Evans.

In my estimation, Mrs Evans is in large part a product of the need for these unionized employees to exact some measure of revenge upon the Mayor. He hurt them, so they will hurt him via Mrs Evans. Now I don't solely view Mrs Evans as being a pawn in all of this, as she has far too much ambition to anyone's blunt force instrument; never the less I think that's the net desired impact she will have from the perspective of these unionized employees. "Revenge is a dish best served cold" (another Star Trek quote by the way), and there are few things colder than the relationship between Janet Evans and Chris Doherty. You need only look at Mrs Evans recent forays into eliminating a Library Authority (for financial reasons, even though the Authority didn't really have the ability to incur debt anyway) and cutting select mayoral appointee salaries as evidence of just how cold the relationship really is these days. For the record, the savings from those reduced salaries will in part gp towards hiring more hourly employees...unionized employees. Think of it as a way for Mrs Evans to shore up the base.

Now I have no clue what he end game to all of this will ultimately be, but a few things are pretty clear to me at this stage:

1. There is plenty of bad behavior to be found on both sides. It's simply wrong on the Mayor's part to not provide reasonable cost of living adjustments to unionized public safety employees and it's simply wrong on the part of unionized employees to use things like sleazy anonymous Internet message board postings to attack the family and reputation of the Mayor. "He hurt them, so they will hurt him."

2. Mrs Evans' agenda has far more to do with ambition and exacting a pound of two of flesh from the Mayor (that whole revenge thing) than it has to do with good governance or fiscal responsibility. Note that I have nothing against anyone being ambitious, including Mrs Evans, but let's just be honest about it: Mrs Evans is no more Scranton's savior than Chris Doherty is the cause of all its problems. While the Tax Payers Association may not want to hear this, I think Mrs Evans and Mr Doherty actually have a few things in common, particularly in the ambition department.

3. As long as Mrs Evans and Mr Doherty are busy playing their political arm-wrestling game, the residents of Scranton will not be properly served by their government.


Yes, this will make for interesting reading over the next couple of years, but mark my words: when all is said and done, Scranton's wage tax will still be 3.4% and the city will still be on the brink of a fiscal abyss. Why? Because basal motivations like revenge and unchecked ambition seldom produce anything positive, a fact that Starbuck learns the hard way in Moby Dick.
Created By Stephen Albert at 8:23 PM