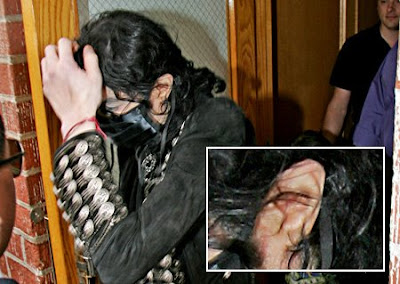 Fascinating story yesterday in the Daily News. You can link to it here.

It seems that Mr Jackson has had so much surgery on his nose that his "doctors" have been forced to harvest tissue from his ears in order to have the parts to continue their good work. Man, if this doesn't creep you out, then I don't know what would. I mean he almost has Vulcan ears now. That's not even human.

Anyway, taking a step back, this should give us all pause on a few levels.

First, having talent (I don't like his music, but I admit that Mr Jackson has some talent) doesn't guarantee anything in life. Certainly not happiness or even basic mental stability for that matter. I know, there have been many geniuses (although I don't consider this guy to fall into that category) who have been deeply troubled, it's hard to find such an extreme example where someone basically pays to be mutilated.

Second, in my experience the world can be divided into two camps: those who know that money can't buy happiness (include me there) and those that somehow believe that it can (I have people in my immediate family that fall into that camp). At one time Mr Jackson was horribly wealthy, but yet apparently so distraught with himself - despite millions of adoring fans - that he felt compelled to physically re-do himself. All that money and yet he couldn't even look himself in the mirror without being disgusted at what he saw. What good was all that money? Sure, it bought him lots of trinkets, but none of that "stuff" could seemingly ease the pain of his own self-perception.

Third, Mr Jackson is walking proof that we all need people in our lives who will tell it to us straight. I am fortunate in that regard, as I have someone like that, but you get the impression that Mr Jackson does not. "I'd like to have my nose done to the point where it is falling off" - "oh, that's a great idea Michael!". This point is related to my second: having unlimited resources can sometimes mean that you have unlimited yes people around you, and your ability to stay grounded in reality diminishes by the zeros added to your bank account.

We Americans like to believe that success is it's own reward, and that the only direction that matters is up. How very untrue. Yes, success can be it's own reward, but in some instances - this in particular - it's clear that success is also it's own punishment. Success, in the absence of a grounding in reality and an acknowledgment that we all need people in our lives to help us see and interpret what is around us, can clearly be more torturous than glamorous.
Created By Stephen Albert at 7:36 AM