This is My (digital) Life 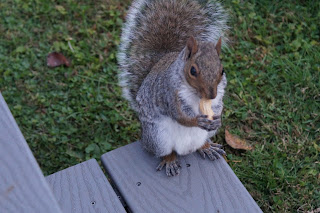 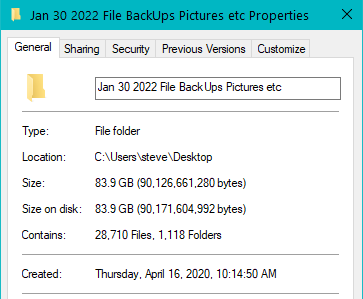 I spent about 6 or 7 hours this weekend reviewing, re-organizing, and backing up* the data I have accumulated over the years.  All of that amounts to what you see above.  It may seem like a lot...or a little bit...depending on your own consumption of all things digital, but I will note that I don't have a ton of video, which helps keep the overall file size down.

I still have work to do, but at least now things are organized enough so that I can take my time to go through individual files in more detail.  This is less a project than it is a weird kind of quest.  A quest for what?  I can't really answer that, except for the fact that I've tried to keep a record of things over the years.  This is where "things" are pictures, music, more pictures, projects I worked on, old employment records, and still more pictures.  The pictures, you see, make up about 13,544 of the files noted above.  This includes more photographs of squirrels than a non-squirrel researcher should actually have.  What can I say?  I happen to like squirrels.

As is the case for most things that I am involved with, there is a deeper meaning here.  In a way, I need these things now and I need them to be organized.  It's a given that I will probably not gaze upon most of these files, but their presence is oddly comforting.  These things, especially the photographs, provide a kind of solid link to the past, one not clouded by my own emotions or mood at any given time.  The pictures don't lie.  The pictures simply are, and they provide a kind of proof that I actually have accomplished some things over the course of a working adulthood.  This is especially important when the current shiny mental crisis dangling in front of me seems to take up most of my mental and emotional RAM.

Before I forget to mention it, I also have a large cache of paper documents too, neatly organized into well-labled binders.

Here's the punchline, if you will, to the above:  All of this is eventually moving towards a great purge of sorts.  I did something of a minor paper purge last year, where I got myself to discard documents that no Steve in no parallel universe would ever be using for any purpose.  That felt oddly satisfying.  I also enjoyed having the extra shelf space.  Getting back to the purge of a digital kind, that will be happening, I suspect when I retire (for real) in a few years.  The pictures will by and large stay, but what will go will be the hundreds of book summaries, copies of draft presentations from 2005 (and many other years), and plans/schemes that span the decades.  It will all be instantly vaporized as if none of it ever existed in the first place.  When that day comes, I don't think I'll need the virtual safety blanket that this stuff provides.  I will no longer feel as if I need to provide proof to myself that I've actually done things.

Maybe that makes me a digital hoarder.  However, I do think it will feel oddly satisfying when the great digital purge occurs.  For now, I need to keep that safety blanket.

(*) The actual backup is to a Samsung 1TB portable SSD, which I keep in my work bag.  I know, I should be backing this stuff up to the cloud, but at this stage, I'm just not ready for that...yet.

Created By Stephen Albert at 9:08 PM

Email ThisBlogThis!Share to TwitterShare to FacebookShare to Pinterest
Labels: Me (Professional), Me. Deep Thoughts, Photography