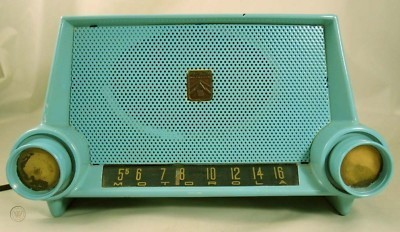 Here's an interesting point to this post:  I don't actually listen to the radio anymore.  Not even satellite radio, even though I have a subscription that runs through July 2022.  Part of this is because I have other things that have taken the place of radio, including various and sundry (with apologies for the double adjectives) online things.  The latest thing, by the way, is an Amazon Echo Show, which I purchased for Ms. Rivers as a Christmas present.  Note "purchased for her"...I liked hers so much that I bought one for myself.
Back to the old-school stuff.
The radio in my small collection that I like the most is a GE BlueMax.  In fact, I have two of them: 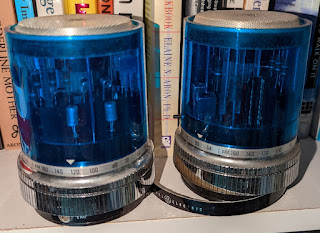 The radio on the left is in perfect working condition.  On the right? It's looking slightly rough, and I mostly got it for parts. The Blue Max is my favorite because we had one when I was growing up, and I recall huddled by it with my brothers on Christmas Eve listening to Santa updates on AM radio.  Anyway, you can read more about the Blue Max HERE.  Current prices on eBay for the Blue Max are running north of $50; for one in perfect condition (such as one of mine), I'd think it's probably worth about $75-$85, not that I would ever sell.
The best-sounding radio I own?  That would be a tie between my not-so-old Tivoli Audio Henry Kloss Model One... 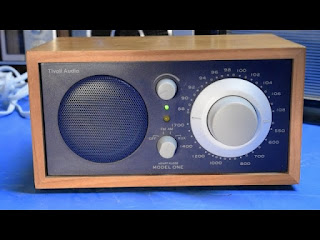 ...and the Bose Acoustic Wave Music III unit that use for my computer audio.  I would note that a close second would be one of my early 1970's Sony table radios.
So what is it about radios that I find so appealing?  As referenced above about the Blue Max, I think it's more about a connection to the past.  Back in those days, it seems like radios (and many other things) were just more important.  In a day and age where most of us upgrade cellphones every two or so years, radios were more of a permanent thing.  Having a radio was important...it was a 6-year-old's portal to the larger world in 1970.  That was a simpler world, for sure.
In 2022 most of us have cellphones that provide an instant connection to the collective knowledge of the known universe via the Internet.  That's a far cry for 1970.  I'm not suggesting that things in 1970 were better, but they were different.  I somehow doubt that 50 years from now, folks will have my kind of emotional connection to, say, an iPhone 8.
Created By Stephen Albert at 8:24 PM

Email ThisBlogThis!Share to TwitterShare to FacebookShare to Pinterest
Labels: Family, Me, Technology