The Horrible List: Penn State (still, kind of, and needlessly I will add)

Preface:  I have two degrees from Penn State.  I am a life member of the Alumni Association.  I served on the Penn State Harrisburg Alumni Society board.  I helped fund a Penn State scholarship.  Penn State will be a beneficiary of my estate.  In fact, I've contributed more to Penn State over the years than I have any other organization.  Simply put, I have earned the right to be critical of PSU. 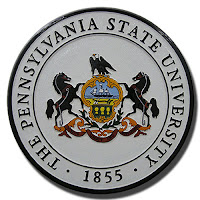 When the words "Penn State" and "Horrible" are mentioned in a sentence, it usually is because of the legacy of the abuse scandal that occurred late during the tenure of former coach Joe Paterno.  That's not where I am going with this posting.  Instead, this is my target:

Source:  https://onwardstate.com/2017/02/14/onward-stats-penn-states-enrollment-throughout-history/
The numbers noted in the chart above are 6 years old, but they still support my main point:  A majority of Penn State students are not affiliated with University Park.  In fact, the 52.32% of students outside of University Park in 2016 almost definitely is an understatement of the present university enrollment.  Wikipedia (I know, a questionable source at best) shows current Penn State World Campus enrollment at 14,687 (citation HERE).
Yet, as someone who is the recipient of a ton of Penn State literature (see the preface), the vast majority of the visual content I receive is overwhelmingly related to University Park.  So is the vast majority of what I'll call the "Penn State speak" in how the university communicates to its alumni.  For me, it's been, at times, disheartening.  Penn State was an enormous part of my formal education and it's where I view myself as having learned, in part, to be an adult.  It's just that the "Big Penn State" wants my Penn State experience to be defined by football games, the creamery, fraternities, Thon, etc.  Note that I was in my 40's before I visited State College for the first time.
I have, for the record, told my Penn State story to anyone and everyone at the university who would listen.  This includes fellow alumni, the development office, annual alumni surveys, and various other ways.  I've gotten some tacit admissions in the past that I'm probably right in my assessment of things (the University Park centric model of the Penn State universe), but the marketing machine that is PSU will not be swayed.  It's basically been a repeat of a discussion I had many, many years ago with another Penn State alumni, who when I told them that I graduated from Penn State Harrisburg, their response was "Oh, is that some kind of satellite campus?".  I shook my head in disgust.  It was as if this person somehow wanted to relegate me to the unpopular kid's table in the junior high school cafeteria.
Thinking about solutions though, there is a kind of two-fold response to all of this for me.
First, Penn State's World Campus will continue to grow in the years and decades to come.  This, not University Park, will drive Penn State's growth in the future.  This will also create even more alumni with zero connection to University Park. Maybe some of these folks will, like me, end up working in small ways to change Penn State.  Alienation is a powerful motivator.  These changes could include more non-University Park-centric members of the Alumni Council and other advisory bodies within the university.
Second, 100% of all the support I have provided to Penn State, both in terms of time and money (not an enormous amount in absolute terms, but significant for me), has gone to Penn State Harrisburg.  No amount will ever go to supporting any facet of operations or programs at University Park.
In the end, I know that some will take this posting as sounding petty and superficial.  That's okay, by the way.  I wouldn't be writing this though if I didn't care deeply for Penn State, which, as I previously noted, dramatically changed my life for the better.  It is precisely because of this that I want Penn State to be better for all of its students and alumni.   Cultural change is never easy, but that doesn't make it unworthy of the effort.  And Penn State is worth the effort.
Created By Stephen Albert at 7:56 PM