We Were Just Never Well Trained 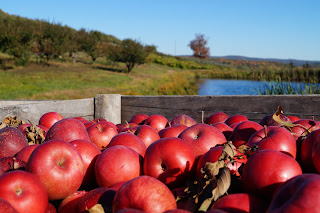 Towards the end of my second year of college, as I was trying to figure out just what I wanted to do with my life, one of my engineering instructors attempted to provide his students with some helpful life guidance.  This was in the form of a short, written piece that talked about how the educational system "taught people how to pick apples".  That's about 80% of what I remember.  The other 20% was something along the lines of how education fails to teach us what is actually important, i.e., why we should pick apples and why apples are good for us.

I wish I would have read that piece, but at the time, it just didn't leave that much of an impression on me.  I think that proved the point the article was trying to make, by the way.  Ironically though, as I grew older, I began to appreciate Professor Joe Burinsky's attempt at enlightening his students.

I was thinking about that point this past week as I was talking and listening to stories about how many of us were programmed with this directive in mind.  It was important to pick more apples than anyone else.  If you weren't the chief apple-picker then you were doing something wrong.  Those last two points make a lot of sense if you are the person that owns the apple trees to be picked.  For the apple pickers themselves?  Not so much.  Now at first blush, this is a bit of a stretch of the original idea behind what I thought was the whole apple-picking narrative, as that had to do with education.  After I thought about it some more though, it really is the same thing.

Now we do need apple-pickers, both figuratively and in reality.  But we are painfully poor when it comes to equipping individuals to deal with the truly weighty aspects of life.  I'm not suggesting that formal education is the solution to teaching young people how to deal with real-life questions of substance, but I am suggesting that it at least needs to make an effort.

Yes, by the way, some teachers, such as my oldest daughter Katrina (proud father moment), do teach more than just the formal curriculum (i.e., apple-picking).  But that comes from her desire to expose her students to things they aren't going to experience otherwise.  Shakespeare isn't normally resident in Brooklyn, except of course if you are in her English class.

Again, at the risk of repeating myself, I know that these things are not owned by the formal educational system.  Much of this belongs to parents, other family members, and friends.  But the older I get, the more convinced I become that what we learn in school is to compete...for grades, for attention, for lots of things.  Good for the tree owners who need apples picked.  Bad for the people picking apples who are ultimately just executing some pre-loaded mental code.

I'll also note that some of us (myself included) were not really taught any of these non-apple picking skills as kids.  It was just expected that I would work hard and get good grades (i.e., learn how to pick apples well).  What I do know outside of apple-picking has been acquired in adulthood through a lot of trials and errors.  At age 57 that continues.

Bringing the conversation back to finish this post, I was talking to a former co-worker earlier this week.  We shared our two stories of life in the corporate apple-picking world, of working hard and trying to do our best, but ultimately being the victims of apple tree owners.  Sometimes picking apples well just isn't good enough.  That's a good lesson to learn by the way. although it would help to learn a bit earlier.

Created By Stephen Albert at 8:52 PM

Email ThisBlogThis!Share to TwitterShare to FacebookShare to Pinterest
Labels: Education, Friends, Me (Professional), Me. Deep Thoughts