The good news?  The addition of another pillow + general exhaustion meant that I actually slept reasonably well last night.  The getting up at 6am part isn't all that unusual for me, as all it takes is the slightest mental spark in my head and immediately my thoughts turn into blazing fires of ideas.  That's more of a curse than a blessing, but it is who I am.

In the "something I forgot to mention yesterday" department:  The Weed Fan.  We discovered that the smell of weed coming from other places in the hotel is made worse when the bathroom fan is off.  This was a discovery backed by an actual experiment, mind you, which is a lot more than most anti-vaxers can say.  Apparently, the smoking floor of this hotel (yes, such a thing still exists, at least here) is right above us, and I suspect that the bathroom exhaust fans of said rooms carry the stench into the ventilation system.  With the fan off in our room, the smell enters.  With the fan on, the negative air pressure in our bathroom helps prevents the smell from entering.  To quote Thomas Dolby, "Science!".

For the record, our observations about Atlantic City were predicted earlier in the year:

The punchline, of sorts?  New Jersey apparently has the worst marijuana legalization law in the country.

On a more serious note, as if the above isn't serious enough, I think that this is my/our last trip to Atlantic City.  While both Ms. Rivers and I have enjoyed the nostalgia of coming back to a place that represented a few happy moments in my childhood (the Atlantic City of pre-gambling days) and in hers (coming back from the Dominican Republic and staying in Ventnor as a child), the reality is no amount of memories can mask the general despair we have seen in just a short period of time.  This is not a good place.  To be brutally honest, this was never a good place, but it was an interesting place.  However, there comes a time when "interesting" is easily overwhelmed by despair and that threshold has been crossed in AC circa 2021.

There is a much, much larger tragedy in this place over and above the rambling of some 57-year-old man hungry for the nostalgia of his childhood.  The bigger story here is of a place where, in 1977, hope was dangled in front of a community in the form of State-sanctioned gambling.  The money would be flowing in and would trickle down into every corner of society.  That failed.  Miserably, I will add.  While failing to tacitly admit that mistake, the government continues to poke at the concept like some kid prodding a dead raccoon with a stick, waiting for some magical life to return.  Those pokes have recently included sports betting and legalized marijuana use.  The former doesn't seem like it has helped, and the latter has just made it worse.  It makes one think that this was never actually about creating a better community for an old Jersey Shore town.

The above reminds me of one very basic fact when it comes to legalized gambling:  The only winner is the house.  Not the gambler.  And certainly not the residents of Atlantic City, New Jersey.

On a less contemplative note, today's activities include some time on a boat, some photography, and perhaps dinner at the Hard Rock Cafe.  I'm planning on avoiding 7-11's this time around.

It's all fun and games until the dolphins show up. 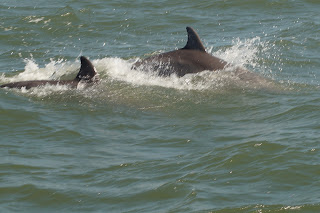 The highlight of this afternoon was some dolphin-watching.  For the record, taking photographs of fast-moving dolphins from a moving boat isn't the easiest thing in the world.  Nevertheless, it was fun. 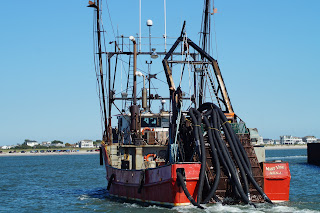 (heading out to troll for quahogs)

It was also relaxing to tool about the back-bay of Atlantic City.

The other highlight was dinner at the Hard Rock Casino, which strikes one as being this kind of self-contained city, not all that dissimilar from a really big cruise ship.  We also spent some time after dinner with our typical "let's waste $20 each on the slot machines". 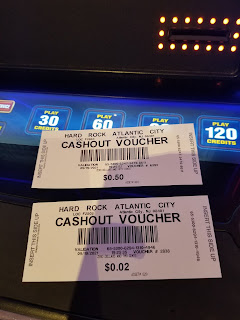 We suck at gambling...especially me.  It literally took about 5 minutes to blow through $40.  Wonder how a company can basically afford to build a self-contained city?  That would be from folks like us.  All well and good, as gambling in a casino is as much a study in sociology as it is anything else.

With dinner, 5 minutes of slot play, and a stroll completed, it's time for the AC2021 trek to come to an end.  I can say, looking back on just our little bit of time here, that it has been interesting.  As I noted this morning, I doubt we will come back.  AC doesn't need us, by the way, and at some point, the novelty of re-treading childhood steps grows old, especially among the clouds of ever-present second-hand marijuana smoke.

One of the things we were wondering about was how COVID impacted the situation in Atlantic City, especially given it struggling pre-pandemic.  My best analogy?  "Atlantic City now is a bit like a Diabetic AIDS patient who then catches COVID".

Tomorrow we head back to the real world.

Created By Stephen Albert at 9:57 PM