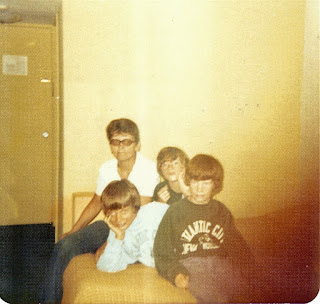 As I have noted here on a few separate occasions in the past, I have a special connection to Atlantic City (New Jersey), as does Ms. Rivers.  See HERE.  We've come here a few times over the years, and this year just happened to be the right time to make the trek back.  In fact, so far this year, this is as close as I have gotten to a vacation.  See switching jobs (but so I digress).  Anyway, we are spending a long weekend here in this place that has seen probably one too many deaths, resurrections, and deaths over the years.

Some might call that last sentence offensive to Atlantic City (AC), a point which I understand.  There is, however, a certain charm to this place, no doubt imbued by memories of a childhood past, at least for me.  I view it now as a kind of anti-matter Disney, but for the gambling sect.  That last analogy might be another reason why I just find AC so fascinating.

Anyway, a few observations over the next few days of the sight, sounds, and smells of AC are in order.

I'll tackle that last point first.  Smell.  Specifically, the smell of marijuana, which seems to attack the nostrils here on frequent occasions...a point made all the more relevant by the fact that, as I write this, I've also actually been here for a bit over 3 hours.   Now personally I don't really care for or about marijuana, which is something I have noted a few times over the years.  While the argument can be (successfully) made that it (weed) isn't worse than booze, a simple fact remains:  I don't have to smell someone's booze as I walk by them.  By way of back-story, see THIS article.  As other States march towards inevitable decriminalization, I think this is something of a forgotten issue.  Granted that my sense of smell is probably my best functioning of the normal 5 (it sure as heck isn't sight...), but someone with half a functioning nose could detect the not-so-fragrant order of burning weed.

Am I over-reacting?  Maybe.  But just as it's someone's choice to indulge in this particular drug, it should be my choice not to be exposed to it in public.  Old man rant concluded.

As for the rest of the long weekend, we have no fixed plans, other than walking, eating, and, in my case, photography.  AC is a fascinating place to take pictures.  Its old beach town bones are still showing in places, complimented and often replaced by the gaudy nature of the modern-day casino business.  Oh, and it has an ocean.  As I said, fascinating.

On that note, more to come.

Created By Stephen Albert at 9:03 PM