Town
I've never taken a cruise before.  Insert excuse about growing up poor [here].  Anyway, this is something of a new experience for me.  Ironically, among three of the Albert brothers (the blogger, Rich, and Chris), I am the last to actually take a cruise.

Speaking of my (late) brother Chris, I was reminded of him twice (so far) over the past few days.  First, at the airport in Denver on Tuesday, I was looking for something to read and found a Rolling Stone special edition dedicated to interviews with Mick Jagger from the Rolling Stones(1).  Chris was a big Stones fan, especially the later stuff.  In fact, outside of the band itself, I think Chris was the only one who could make that claim.  Had he been alive I would have given him the magazine, and I'm sure he would have thoroughly enjoyed it.  Second, I had always hoped to be able to maybe travel with Chris and his wife in later years.  When I think about losing him, that's what hits closest to home: Namely that there might have been a time together in the future when things in our collective lives were a bit less complex and we had time to maybe unpack so much of what happened to us growing up.  Anyway, I'll be thinking about Chris while onboard.

As we walked about Bergen, I was amazed at just how prevalent elements of United States culture(2) are in a place that's pretty far from home: 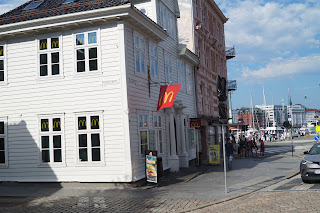 "Vil du ha frites med det?"(3)
A good part of the day involved hiking.  There is a kind of mountaintop park in Bergen that is serviced by an inclined railway.  Now, this is the 5th inclined railway that I've been on in my lifetime.  Listed in order of scenic appeal:
No offense Dubuque, but you do get extra points for trying.

The view from the mountaintop was nothing short of spectacular. 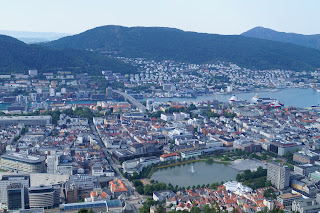 (Bergen, from the hills)

While we took the railway up to the top of the maintain, we did walk back down.  Good idea on my part, save for the fact that I had a backpack ladened with a laptop and other assorted junk (most of which I should have squirreled into my suitcase, but so I digress). 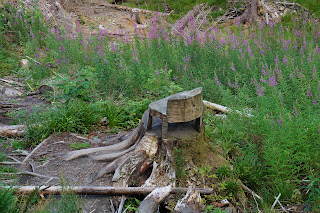 (on the trail, back down:  those crafty Norwegians!) 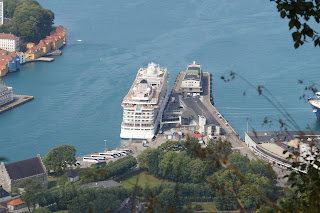 (the Viking Star, our home for the next two weeks, from the trail) 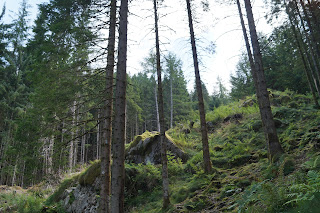 (on the trail & beautiful)

I learned my lesson from that experience, although as I write this(5) I'm feeling no ill-effects; "getting older" reference will have to wait for another day. 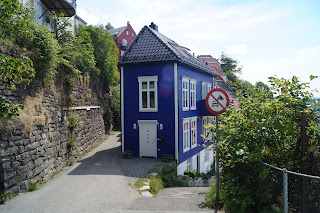 (Bergen, and I suspect most of Norway, is full of interesting housing)

After the hiking and wandering around the city center of Bergen, it was time to get on the ship.

Viking Star
Dragging a sore back and a bruised head(6) to the port, we headed on board the Viking Star.  More about the ship can be found HERE.  I have to say that I'm impressed.  Between how clean everything is to the exceptionally helpful staff, this is a great place.  Then again I have nothing to compare this to ship-wise.

The other major event of the day was eating at something called the "Captain's Table"; no you don't eat with the captain, but rather you eat a fancy, themed dinner prepared by the ship's chef.  "Fancy" effectively means that I won't eat it, as my dietary preferences are, shall we say, limited.  The meal was, I think, 5 courses.  In theory, I could have eaten the main course, which was lamb, but I just can't bring myself to do that; I feel the same way about rabbit.  A lamb looks like something you have as a pet, not something you have for dinner.  Anyway, Ms. Rivers and her family, with which we are traveling, really enjoyed the dinner, which made the whole event worth it.

It was a good day.

Coda:  If there is a heaven, it likely involves sitting on a ship balcony, writing.

(1) The band, not the magazine; I know, this gets confusing.

(2) I know, that's something of a contradiction.

(4) Unlikely, based on the appearance of the speaker.

(6) I banged my head on a steel cross-member of a tent at the local fish market. Yes, that happens with some frequency, re Tall and poor depth perception.
Created By Stephen Albert at 2:40 AM