My late brother Chris was a very proud veteran of the United States Navy.  He is now, in fact, buried in the veterans section of a local cemetery, something that would make him happy. As I woke up this morning and looked out over the water, it reminded me of just how odd it was that he ended up in the Navy.  However, my brother Chris was nothing if not always full of contradictions.

First, a few things to level-set:


Truth be told, I'm not sure what drove Chris to the Navy.  I do know the decision to join the military was a logical one for him, as he wasn't an academic type in school (none of us were...I had decent grades without working too hard, but I think that was just random genetics at work), and he had a burning desire to move away from home as quickly as possible.  He also had basically zero marketable skills...none of us did at that stage...and in Scranton we as far from politically connected as one can get...so finding a job right out of high school that paid enough to live (independently) simply wasn't going to happen.  What to do?

As best I can recall, Chris knew he wanted to join the armed services upon graduation from high school.  My best guess is that, for him, the Army was too common, the Air Force was boring (and they don't let kids just out of high school fly planes) and the Marines offered only one real job opportunity, namely killing people.  I suspect that his friend Tim was also involved in this decision.  Anyway, after meeting with a Navy recruiter and being given quasi-graphic descriptions of what certain women will do for money in the Philippines, well the decision was made.

About the only time I had ever heard of my brother Chris actually being humble was to be found in his letters home from basic training.  Whatever they did, they did it well, because the process of basic training (which for Chris was in Great Lakes) literally broke him down and re-formed him.  Someone who had been undisciplined was suddenly just the opposite.  Maybe that large Hispanic drill instructor yelling "Ricky Recruit" at him the top of his lungs to do with that state.

Here's where the story gets just a tab bit odd (well, make that "odder"):  My brother opted to train to become a medical corpsman.  Note that Chris expressed zero interest in anything medical.  Nothing.  Zero.  Zilch.  He liked cooking, so I had thought that maybe that's where he would land, but no, it was medical stuff.  In later years, while likely under the influence or coming out from under the influence, Chris would describe how horrible some of the visuals he saw in his medical career, and while sorting out fact from self-dosed pharmacology may be somewhat difficult, I do believe that Chris saw some difficult visuals in his service.

Here's where I get to throw in yet another contradiction:  My brother Chris never served on board a ship.  Yes, a sailor who never actually sailed.  Instead, his service was spent between Norfolk, Virginia and Camp Lejeune in South Carolina.  In talking to Chris over the years, I never got the impression that the stint in Norfolk was all that memorable from a career perspective.  Personally, that's where (I believe) he met his first wife, but job wise, it seemed to be something of a yawn.  He did, over the years, talk quite a bit about Camp Lejeune though.  By way of back-story, the Chris of the mid-1980's was very physically fit, and since being a medic with the Marie Corps required being able to keep up with said Marines, that part was a lay-up for him.  Other random tidbits from Chris during this time of his service included:

After leaving the Navy Chris never displayed any interest in working in the medical field.  Instead, Chris ended up in government service...with the Postal Service, Veterans Administration, and Office of Mine safety.  I honestly don't think any of that work actually interested him all that much; after all, his work at the VA and Office of Mine Safety was in maintaining computers, and even I knew more about computers than Chris ever did.  What did interest Chris, and what he did as side jobs (and one full time gig while living in New Jersey) for virtually all his life, was cooking.  My brother loved to cook.

In a life full of contradictions...a man who was a pro-abortion, anti-established religion "conservative"...the non-academic who never the less earned his college degree...a tough guy who simply loved cats and adored kittens...my brother never the less embraced all of what he did with enthusiasm.  He was, by every measure I've heard, exceptionally good as a medic.  As a cook.  As a postal carrier.  Even as an IT guy (although I still think I knew more about computers than he did). 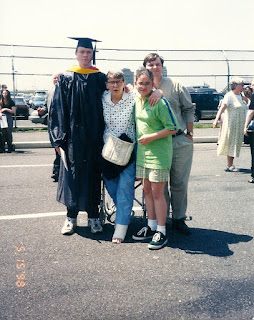 Somewhere in New Jersey:  The unlikely sailor
having earned his college degree,
with his mother, daughter Miranda, and brother Rich.
Created By Stephen Albert at 9:57 AM

Email ThisBlogThis!Share to TwitterShare to FacebookShare to Pinterest
Labels: Family