I actually am sitting on a bay, although I am actually about 12 feet from a dock, truth be told.  I am also definitely wasting time.  As part in parcel of that wasting time, I offer the following...

...I had another posting started about how I love being near the water.  However, I deemed that dumb-ass, and therefore it will not see the light of day.  I do like the water though.  Thinking ahead, many years into the future, I'd like to retire somewhere that is a) Slightly warmer than northeastern Pennsylvania and b) Near the water.  Why?  To quote that great scholar Bluto Blutarsky, "Why not!".

...Is it normal to always have a random song always playing in your head?  At the moment it happens to be The Who's "You Better You Bet".  "I know only fools have needs, but this one never begs".  As I said, random.

...It's difficult to truly comprehend the size of cargo ships, and by extension the marvels of international trade, until you actually see one in person.

...On today's agenda was pretty much nothing.  My better half went to Washington D.C. with my youngest stepson and her niece.  These days I find Washington D.C. to be disgusting, so I opted for some creative loafing on the Chesapeake Bay.  I have no regrets.

...I brought two books on vacation and haven't made much progress.  They are Consider the Lobster by David Foster Wallace and The Jesuit Guide to Almost Everything by the Rev. James Martin, S.J.. Lobster is a tougher read, mainly because Foster Wallace is a pretty literate guy, and his writing is infused with references to authors that I know about (Updike, for example) but will likely never, ever read.  I'm committed to both books, regardless.

...I haven't thought much about work.  That's a good thing, although I will regret it come next Monday.

...Blogging 101:  I struggle sometimes with something I shouldn't, namely this kind of pull to write about something that I secretly think other people might be interested in reading.  This is in spite of the fact that one of the stated ground rules of this blog is that I just end up writing about stuff that interests me, and me alone.  The sad reality is that I do check page views and I actually do know what kinds of content actually drive interest.  For the record, this posting won't.

...This week's Fall Count:  2.  Fall #1 was coming into the house Monday evening, missing the location of a step.  Fortunately I fell and rolled over (kind of like a dog).  The only damage was to my pride and two fingers.  Fall #2 was an old-school fall-off-of-bike-roadrash.  I was biking with my 80 year old mother-in-law, who, by the way, didn't fall.  Since it's been a long time since I've actually fallen off of the bike, I view this is as a kind of "red badge of courage" moment.  My right hip and elbow, both of which were on the bleeding edge, beg to differ.  Tomorrow we are going sailing, and my goal is to be injury free.

...Forget illegals from south of the border, the bigger threat apparently is the Nutria. 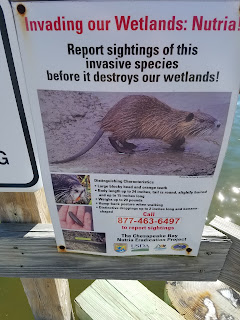 ...Crabs are giant sea-bugs.  So are lobsters.  There, I said it.  Cockroach bisque anyone?

...Sadly, I have been somewhat exposed to the news over the past few days, via my father-in-law's consumption of the television variety.  I'm trying hard to not pay attention, as I am more or less still under a general news boycott.  Unfortunately, part of what I heard involves North Korea.  And I keep remembering the story whereby candidate Trump allegedly once asked why we don't use nuclear weapons.  I'm hoping that falls under the category of "Fake News".

...Speaking of "Fake News", here's what that term actually means:

NEWS THAT YOU DISAGREE WITH.
Newsflash:  All news, as it is written by emotional humans, is slanted.  The trick is to get it from a variety of sources, so as to see that the truth, as it always does, lies somewhere in the middle.

...We had a stray dog visit us (several times) this afternoon.  Eventually his owner was found driving by looking for him, so pouch and master are now reunited.  I love dogs...conceptually.  The actuality of dog ownership is another story.  To be blunt, I'm not (yet) a good enough human to be entrusted with one of God's most wonderful, loyal creatures.  Good thing that cats are low maintenance.

...Pennsylvania is liberalizing marijuana rules, and soon growers will be establishing businesses in the state.  As stated before on several occasions, I think the recreational use of marijuana is f&%king stupid*.  However, "f&%king stupid" isn't a crime, otherwise professional wrestling and Nickelback would be illegal as well.  Yes, it get it, marijuana has medicinal uses, and for those that use it in that way, well, good for them.  Here's to cancer patients gaining much needed weight through the munchies.  Let's not kid ourselves though, many who advocate for the legalization of marijuana are more interested in getting high and listening, for example, to the Dave Matthews Band.  Pouring burning crap into your lungs while listening to Ants Go Marching just doesn't sound appealing to me, mostly because that reality one is trying to escape will sadly be there long after the song and the high is over.  Yes, in the end, reality always wins.

Created By Stephen Albert at 8:27 PM

Email ThisBlogThis!Share to TwitterShare to FacebookShare to Pinterest
Labels: Marijuana, Me, Road Apples