This weekend I had the home to myself, as my wife and my stepsons were in Massachusetts visiting family members.  I would have gone, but I'm saving up my vacation time for an upcoming trip (the trials and tribulations of the new employee).  Anyway, the timing was actually pretty good, as I had been meaning to do work on our second-floor porch, which just happens to be about 6 feet from where I type this very posting.  A quiet house meant that I could make a lot of noise...and grime...with only the cats to offend.  The actual work, by the way, went well.

By way of digression, we really liked the second-floor porch when we bought the house, but it was probably the most shabby part of the structure.  Structurally, by the way, it's in very sound condition.  However, the screening seems to pre-date the Korean War, and as a result, it just had to go.  While just replacing the actual screens would have been okay, I preferred, as I usually do, to take a far more difficult route, namely to rip out the screening and its framing.  The underlying idea was to go from 7 panels of screening to 4, improving the amount of light, airflow, Feng Shui, etc. 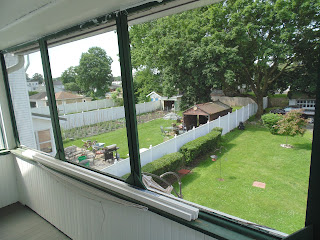 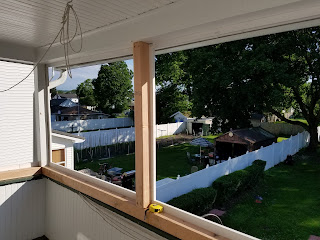 Oh, who am I kidding:  I just like to play with tools and break things.  Where "things" hopefully don't include body parts.

I do, in all candor, have a habit of injuring myself with most household projects that involve things that are heavy, sharp, or otherwise even remotely dangerous.  There was the time, for instance, where I literally filleted my leg as I was cutting drywall (afterward I learned "never use your leg as a cutting board").

Anyway, I did, in fact, remove all of the old screens and associated framing, as well as building the structure for the new screens.  See above; I actually made more progress than what you see in the photo.  My wife does most of the painting work in the house...well the painting that requires decent eyesight to execute...so things are pretty close to being turned over to her for phase two of the project.

As far as breaking things, well, no broken bones.  That's the good news.  The bad news?  Well, there's this... 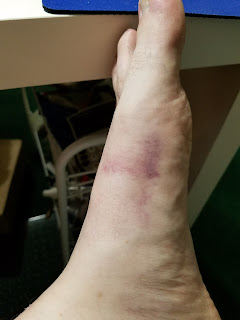 (with apologies for showing an unadorned body part, and yes, I dropped lumber on my foot)

...and a few cuts to my fingers.  One of the cuts was on the bleed-y side, so much so that I ended up having to undue some electrical work (part of the project involves replacing a porch-mounted flood light), as I started to bleed all over the wires.  Can you imagined how that would have smelled had the power come on?  The bruising and bleeding comes a bit more easily these days, thanks in part to modern pharmacology's wonderful blessing of next-generation blood thinners.

For the record, I'm actually pretty good with electrical work, and, believe it or not, have never accidentally so much as lightly shocked myself.  For the life of me, I'm not entirely sure how this is even possible.

Created By Stephen Albert at 10:35 PM

Email ThisBlogThis!Share to TwitterShare to FacebookShare to Pinterest
Labels: Health, Humor, Me