What's In A Name?

I don't believe that women should change their last name when they get married.

There, I said it.

Now if they want to, well, who am I to judge (to paraphrase a famous Pope)?  I'm not capable of fairly judging myself, let alone others.  But this is my ramble, so I'll continue.

Anyway, I've never liked the idea of a woman having to "become someone else" just because she got married.  This is especially true for my daughters (hint, hint, ladies).  It just seems like, well, a kind of ownership:  Frida Smythe becomes the property of Mr. Benny Jones and is, therefore, Frida Jones.  Please, can we at least make it "Frida Smythe-Jones"?  Why shouldn't it be "Benny Smythe" for that matter?  Or Benny and Frida Smythe-Jones?

I had this conversation with both marriages, by the way.  I'll note that the second time around I was a bit more successful, although not because of any efforts on my part.  Ms. Rivers had been going through a difficult divorce when she decided that she wanted to "take back" her rightful Rivers-ness.  All well and good in my eyes.  When we knew we were going to get married, she told me in a fairly direct manner that she didn't want to be "Chris Albert".  I think she expected me to be somehow bothered or upset; actually, I was relieved.  It made practical sense as well, given that:

Complimenting the conversation was the fact that we both decided we had enough children (in part because I didn't want to be going to a high school graduation in a walker).  This took the notion of what to call the children off the table.  I know that's more of a real issue for younger couples, but see above:  hyphenated names sound cool and sophisticated anyway.

Reasonable people can disagree with me on this one, and to be honest, I did some checking on the interwebs and mostly found people who wanted to change their last names.  All well in good.  In the end, what's in a name anyway?  Unless, apparently, that last name is "Drumpf". 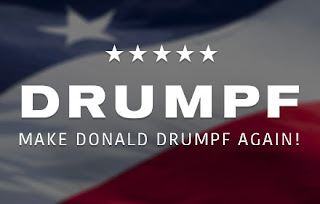 Created By Stephen Albert at 9:19 PM