Easter (thinking about my brother) 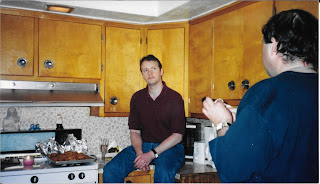 My late brother Chris loved to cook, so today being Easter made me think of all those times when he would be proudly planning some big holiday meal...and I would find excuses to mostly not actually have to eat it.  Now, in all fairness, my brother was a pretty good cook; it's just that I am not a very good consumer of food.  Chris did like to sometimes experiment with food, mostly in later years Hispanic dishes, which I, having the eating habits of petulant 7 year old, would not eat.  My mother would also complain that the food Chris would cook was "bland", but that was mostly her just finding a reason to be critical.  My late mother and my late brother both secretly relished arguing with each other, even when it was over the silliest of things.

Another part of not wanting to go to Chris' house for big family meals was the fact that, for so many years, I was always running from one family to another around the holidays.  It was maddening and not fun.  Instead of a holiday being something to look forward to and an opportunity to relax, it instead was this exercise in stress.  That constantly running around the holidays is something that I try to not impose on my own daughters, in that while I do want to see them as much as I can, I don't want to be the source of what I hated so much in years past.  I hope they understand that point.

Now while I wouldn't necessarily eat at my brother Chris' house over the holidays, I always did stop by to say hello.  In the early years, well, a hallmark of those visits would be the inevitable series of political debates.  In hindsight, I've found a word to describe those events:  Stupid.  Yes, they were stupid.  Arguing politics is about like arguing ice-cream flavors.  Subjectivity actually was the word of the day back then, but I just didn't realize it at the time.  As the years went by the political debates with Chris became less and less ardent, mostly because, in hindsight, my brother's interests in outside things was becoming slowly diminished.  Of course, in later years there was also the advent of having the drug dealer over for dinner, which at the time I found annoying, but then again my brother did have something of a bent towards the ironic.  Hindsight being what it is, I should have been far more than just annoyed.  Part of me wants to type "I should have carved the dealer instead of the ham", but I'm not a violent kind of guy.

So now I'm sitting here, stalling from having to change cat litter and then get ready to go to church (something I don't do all that often).  I am having my two (remaining) brothers over for Easter dinner today, which actually is something I'm mostly looking forward to, truth be told.  Part of what makes it enjoyable is the fact that I know they won't be running from place to place.  My sole NEPA-residing daughter will be stopping by later today as well...I just hope this doesn't require running around on her part.

Happy Easter one and all.

Created By Stephen Albert at 9:26 AM