Friday, April 28th
By the numbers:

Yes, the education part of my graduate degree is finished.  My only remaining requirement for graduation is to pass an industry examination, which I'll do in the Fall.

Relieved?  Not sure, mostly at the moment I am rather numb.  My final act as a graduate student was a final exam for an HR Metrics and Statistical Research class.  It was probably the most difficult exam I've taken in the program, and I think I probably did a bit better than average.  Heck, basically I would take just about any grade at this point, as I'm pretty darn spent.

Looking back, well, it's been a long road.  See above.  I'm not sure I would do it all over again, and I know for a fact that my formal college education is now over with, as I simply don't have this kind of effort left in me.  It feels rather like I've taken a turn, and now I need to focus on some other things.

If there is one regret in all of this, well, it would be that I wish my Mom would have been alive to see this day come.  As I've noted in prior postings, my mother was a tough human being, and while expressing (positive) emotions was not her forte, I knew for a fact that she was proud when two of her sons graduated from college.  She was, without a doubt, the best-educated person I've ever met who didn't have a college degree.  When she was alive I had talked to her about going back to school, and her comment was always "well, what's stopping you?", usually though including a foul word or two in the mix, just for emphasis. 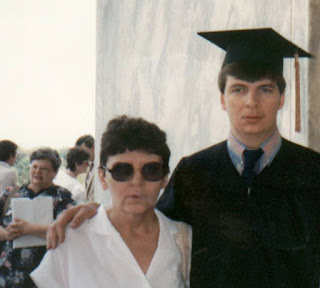 Very few things in life are achieved without the help of others, and that's especially true of this particular milestone.

First and foremost on my list of people to thank is my wife, who has been just incredibly supportive of my continuing education, going back to when I first started seriously thinking about it in 2012.  She has also been my fearless editor, literally reading hundreds of pages of academic stuff I've produced over the years.

Secondly, thank you to all those who have offered words of encouragement and support, including co-workers (at two different employers), many of my managers who took an interest in my professional development, and my daughters who were always encouraging me, even when I felt like a complete looser as I struggled to master APA. formatting.  All have given me mental booster shots that always seemed to come at precisely the right time.

Finally, thank you to my classmates and instructors in the Villanova University Graduate HRD program.  Formal learning aside, just the experience of meeting and working with so many talented and diverse fellow Human Resources professionals has enriched me significantly.  The degree itself is just an added bonus.

Yesterday and today have been what I'll call the "rubber band" days, namely that time when, after you achieve something important, you have this kind of spent, empty, vacant feeling.  I have had these from time to time in my life.  This is, by the way, a great testimony to how my mind was programmed to work for so many years.  I'm using the past tense in that last sentence, more so out of hope that I'm slowly but surely evolving to a better state, likely reaching a point where I can genuinely celebrate a success, probably a year or so before I leave this life (which hopefully won't be for a very long time to come).

Anyway, part of the rubber band feeling, I'm sure, stems from a kind in incessant wanderlust to aways be doing something important.  That's all the more remarkable given the fact that I have a mental list many rows long of the things I promised myself I'd do once I was finished with school.  You would think I would feel some sense of satisfaction knowing that I can begin to tackle that list, but alas, the feeling escapes me.

Speaking of motivation, in my rubber band state, I was thinking about why I did this...why I decided to go back to school at age 50...in the first place.  The unscientific results of that pondering are noted below. 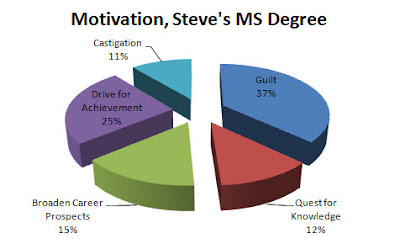 Yes, guilt is something of a major driver in many things I do.  Catholic guilt (and the very closely related Jewish guilt) is one of the most powerful forces in the universe, right up there with gravity and overly caffeinated beverages.  In this case, it would be the guilt over not completing the degree, as it would let down one or two people who really encouraged me to pursue it in the first place (along with a few other choice-but-rotten chestnuts).  At the end of the day, I suspect that guilt, like caffeinated beverages, can be a force for good or bad, depending on the frequency and amounts in question.

So there you have it, an academic milestone achieved, and a special kind of empty feeling, all in the span of two and a half days.

In the end, it will get better.  It always does.  The screed above is really part of my tried and true method for getting out of mental funks, namely proclaiming my weaknesses to the entirely of the Internet, mostly in the hope that I will then feel guilted into getting over myself.  It is all so wonderfully circular.

Created By Stephen Albert at 9:10 PM