According to a list compiled by the website travel.alot.com, Scranton Pennsylvania is the 7th saddest city in the United States.  You can find the whole list HERE, with the Scranton entry HERE.

I don't disagree with the placement.  Heck, it possibly should be ranked even higher.  I note this as someone who was born and raised in Scranton.  The city will always be my home, no matter where I live, for the rest of my life.  I realize though that Scranton is broken, badly.  Here's why I think "The Electric City" earned its placement.

1) Nepotism
I'll list this separately from corruption in general because it (nepotism) isn't about immediate financial gain, as opposed to, say, pay-to-play governance (also known as "Cordaro").

Everyone who has lived in Scranton for any length of time knows that, when it comes to the public sector, Scranton is a "who you know" kind of town.  If you're not from a politically connected family, by and large, it's far more difficult to gain employment in local or county government.  An effect of the nepotism is that many folks* who end up becoming public servants aren't the best qualified for their jobs.  What's more, because nepotism is so rampant, many who would be a good fit for public sector employment, folks who could add real value to how the city and county are governed, don't even bother trying to find employment precisely because they know the game is rigged against them.

What makes this far, far worse?  The simple fact that you won't hear the Mayor of Scranton, for example, ever talk about nepotism as being a significant problem.  Nor will you hear members of the school board.  Or City council.  It is the "silent epidemic" of Scranton that everyone knows about yet few admit.

Nepotism creates a kind of vicious, self-perpetuating cycle that drives down performance and drives up a propensity towards entitlement (especially among politicians), stagnation, and corruption.  This is why it's #1 with a bullet on my list.  Deal with nepotism and you can begin to deal with some of the other items on this list.

(*) But not all...I know some very dedicated Scranton public servants.  It's just that they are the exception, not the rule.

2) Corruption
Just one of many examples can be found HERE.  Scranton and the surrounding communities breed corruption like puppy mills breed genetic defects.  What's more, corrupt practices are practically embedded in the collective psyche of the area.  Like its cousin nepotism, everyone knows that Scranton is a corrupt town, but yet few viable candidates for mayor, for example, make fighting corruption even a campaign issue.  Why is that?  Simply put, most mainstream candidates for office in Scranton want to perpetuate bad practices simply because they view it as a kind of job perk, akin to getting an extra few vacation days per year.

By the way, is "fighting corruption" a campaign plank of Mayor Courtright?  See for yourself HERE.  The short answer is "no".   In fact, his campaign website is a single page that proclaims that Scranton is "on track".  How's that for educating the Electric City electorate?

3)  Low Expectations
Scranton's residents have chronically suffered from low expectations.  When I was younger, an area resident was considered to have "made it" if they got a job working for the Post Office or Tobyhanna Army Depot.  Let that one sink in for a few minutes.  It hasn' gotten much better.

A part of low expectations, at least in my experience, is a habit of being overly deferential to authority figures.  This shows up in a population that readily fails to question the actions and motives of those in power, be they Bishops or Mayors.  It's a kind of genetic imprint from back in the coal mining days when one was happy to get ripped off at the company store.

4)  Class Stratification
Growing up, my Mom would tell me that, in Scranton, there were two kinds of Irish:  The Shanty Irish and the Lace Curtain Irish.  That's something of a microcosm for the city as a whole.  There are a number of well-off families in the area, of the sort that sends their children to Scranton Prep, who end up being the parents of doctors and lawyers who end up living in the nice sections of Green Ridge and Minooka.  At the other end of the spectrum are those with far less in terms of economic resources or even a template for economic success.  Yes, this isn't a wholly Scranton problem, but the city is something of a Petrie dish for the worst that class stratification brings to an area.

5)  Voter Apathy
The coal miner mentality is alive and well in Scranton, decades after the last mine closed.  Scranton's population routinely vote into office individuals who won't even utter the words "nepotism" and "corruption", let alone actually make structural changes to address past problems.  Well, the 30% or so that actually vote in municipal elections.  This isn't a party line voting issues either, as the city and county have voted in plenty of shysters from both ends of the political spectrum.

Ask a city resident about nepotism or corruption and you're likely to get a "well, that's just the way things are around here" kind of answer.  See above:  It's the same answer that those miners probably gave after having been ripped off at that company store.

6)  Public Sector Incompetence
Think of this as being an output of #1 & #5.  Scranton has been functionally bankrupt for decades, yet city leaders continue to plug budget holes with one-time revenue sources, proudly proclaiming that the city is "on the road to recovery".  As I've noted on the blog before, even the recent multi-million dollar windfall from the sale of the Scranton Sewer Authority will not solve the city's fiscal problems; all it does is bide time until bankruptcy.  Why?  Consider this:  Pumping tens of millions of dollars into the city's municipal pensions will not make them even close to fully funded (meaning that there aren't enough assets to cover future pension liabilities).  Yet the politicians running the city want voters to believe that fiscal recovery is just "right down the tracks".  It's not.  As I said a few sentences ago, Scranton is functionally bankrupt; all that's missing is the legal designation and the opportunities that such a declaration would bring.

More proof:  According to data on the city's own web page, despite the dire fiscal situation facing Scranton, the cost of municipal government is continuing to grow. 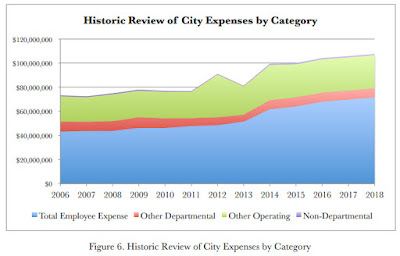 The first rule of getting yourself out of a hole?  Stop digging.  Yet Scranton's leaders seem intent on increasing the costs of a government that city taxpayers can't actually afford.  Why?  Because they benefit from it.

Another example of public sector incompetence in action:  The former president of the Scranton School Board was a public transportation bus driver with a G.E.D. and the vast majority of Scranton voters found that perfectly acceptable.  At the risk of sounding elitist, I'll note that I have no personal qualms with the man (who still serves on the board), by the way, but shouldn't the residents of Scranton want someone running the school board who has a background in education?  Or finance?  Or legal matters?  For a well-written piece on the dire situation facing the Scranton School District read THIS blog posting by Tom Borthwick.

In the end, Scranton is sad mostly because it's voters are comfortable living in that sadness, as evidenced by their continuing habit of electing people to public office who, at best, routinely deliver mediocrity.  They shrug their collective shoulders, sigh, and move on.  As I noted previously, I love Scranton, and it will always be my home.  Yet I have no desire to live there, at least not anytime soon.  It's a town frozen in a kind of 1940's time warp, full of back-room dealings and coal barons who actively teach miners to be grateful for the crumbs thrown their way.  The worst part?  It could change, but it likely won't.

Created By Stephen Albert at 5:59 PM