Rest in Peace Champ of the World

Among the things I remember most from my childhood, I count the Apollo Moon landings and seeing clips of Muhammad Ali fighting as being among the most vivid.

For the uninitiated, you have to understand that Ali was incredibly remarkable for two reasons:

1) He was a man of exceptional principles.
2) He was the very, very best at what he did.

Ali was like Michael Jordan and Wayne Gretzky, but with 1000% more personality.  Ali was a very smart man who just happened to beat people up for a living.  Ali was a walking contradiction that made it look like there was never any contradiction at all. 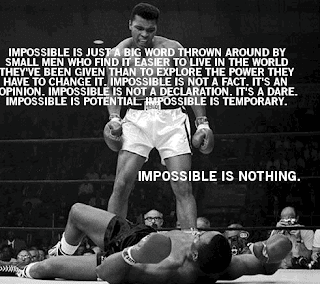 I actually once got within about 20 feet of Ali.  It was back in Louisville (KY), around 1992-1994 and I was waiting to board a plane when the Champ of the World arrived on an incoming flight.  He was a big man...bigger than I ever imagined.  He was also impeccably dressed. 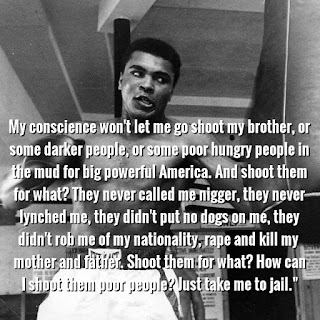 In a world that lacks sincerity and real conviction (witness countless former "enemies" now endorsing Donald Trump), Ali stood out as someone who said what he meant, even when it wasn't popular.

Created By Stephen Albert at 4:28 PM