Our Parents Lied to Us: Monsters are Real (Rape Culture Edition)

There's been a lot spoken and written over the past week or so about the results of a certain rape trail in California.  I'm not going to even try to get into the details of the case, as for my purposes they don't really matter.  One thing though that has come up, especially in virtual circles, is the notion of a "rape culture".

Now I consider myself a reasonably intelligent person, at least when it comes to certain things.  However, none of those smarts seem to help me when it comes to the whole "rape culture" thing.  I do don't understand it, and in all honesty I don't want to even make the effort at understanding it.  Why?  I think it comes down to this:  I find violence against anyone for the mere purpose of personal gratification to be incredibly repugnant.  If you do that, you forfeit your claim to being a human f&^king being in my book.  Now I could study the concept, but that would make me no more learned, no more informed, no more a better person.  I would simply be left intellectually soiled, with even less hope for our species.

I'll take it even one step further:  I don't know if there is a culture of rape.  I do know that there is a culture in this country of lofting athletes and athletics up in ways that beguile their actual purpose in society, namely just entertainment.  Now if someone wants to grow their physical abilities as a matter of personal development, well then I think that's great.  But getting paid a million dollars to do that...or...getting a pass on rightful jail time for a horrid criminal act just because you do that...well I'm sorry, but no.  No entertainer, be he/she a reality television star or star quarterback or a Stanford University swimmer, deserves those kinds of outcomes.  They simply don't, and as I see it, part of the problem in our society today is that far too many are blind to how ridiculous our priorities have become.  When we loft these people up to supra-human heights, is there any wonder that some may actually act like the rest of us are, well, below them (at best)? 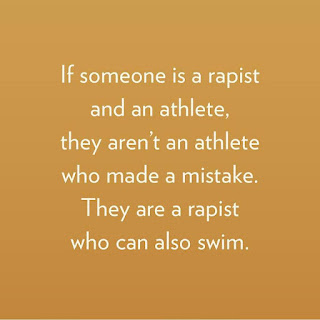 Now before anyone gets their dander up, I'm not claiming that all athletes are horrible human beings.  What I am claiming though is that we, as a society, place too much emphasis on sports in this country.  Sometimes that's benign, other times it produces wretched results.

By the way, we also see the above horrid skewing at work in our own area, when school academic programs are cut in local districts, but football programs are left intact.  That's another posting for another day.

Come to think of it, maybe the idea of a "rape culture" is really just another example, in a long line of examples, where we've allowed ourselves to be blinded by shiny objects (such as people who entertain us with their ability to run/swim/throw a ball really well) while our souls are cut out in the process.  Maybe this is less about high concepts such as culture and more about basic human dignity, the kind thrown out a window and set on fire the moment an alcoholic binge turns into the intimate and forceful violation of another.

As I said at the beginning of this posting, I don't get the idea of "rape culture", maybe because I don't need a fancy label to describe the horror of your mother or wife or daughter or sister or friend being victimized in a manner that's going to have a shelf-life long past 6 months of incarceration.  I don't need some kind of societal explanation to help me understand that which drives senseless violence of the worst sort.  The only understanding I need is that some people are just monsters, and sadly, our society all too often puts them on pedestals.  We helped make this.  Maybe, just maybe, that's "rape culture".