I have to confess that the whole writing gig has gotten difficult of late.  One of the most glaring reasons was a recently completed graduate course that just seemed to tax my limits in more ways that one.  I know, "boo hoo", "#firstworldproblems", "suck it up buttercup", etc.  I get it.

Anyway, I'll also confess that there is a lot these days that's simply disheartening and mentally taxing.

I actually have two things I want to write about, but I just don't have the mental energy to pull either off at the moment.  That makes me just a tad bit disappointed in myself.  In fact, it's fair to call this posting a "posting for the sake of a posting", although as I write it I have no idea where it may go, so who knows?  The sad reality is that while I edit (a lot) for typos (but yet still have plenty), in fact, 98% of what's written in every posting of mine is a stream of consciousness anyway.  Yes, this is how my mind works.  Except it has far fewer typos.

One bit of bright news is that my school gig will be on hiatus for two months or so, and I'm likely changing my overall plan for the home stretch of my graduate education.  My original plan was do-able, but I simply hate, at age 52, feeling stressed and tired...and that plan would have left me even more stressed and tired.  I'm still graduating next year, but the actual specifics will be changing ever so much.  Heck, at this stage I'm just in it for the resume stuffing anyway.

Another bit of bright news?  I'm starting to catch up on some reading for fun and am enjoying a great book.

Coming up is a few days worth of vacation; nothing fancy, just some time with my wife's wonderful family and some hiking.  Maybe even some writing.  I'm hoping for a continued mental step-down from the latest incarnation of school and some additional focus on the right things.

I'll wind this posting down with something from The Onion that made me genuinely laugh out loud. 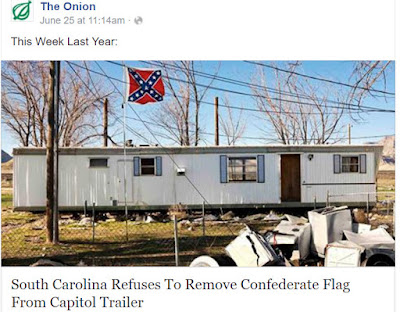 On a related note:  While stopping at a convenience store today, I saw a car with a bumper sticker that basically said that the Confederate battle flag wasn't a symbol of racism and slavery.  I stared at it for a moment and thought to myself, "Hey, he may be right...actually, it's mostly just a symbol of treason".  I was tempted to wait for Cletus to come out of the store from buying his chewing tobacco, in order to have a intellectually stimulating debate about the topic, but I thought better of it, as I'd likely need to explain what "treason" meant (and I didn't want to get shot by some hillbilly with more ammo than IQ points).


Created By Stephen Albert at 9:03 PM