Led Zeppelin...It occurred to me that the band's movie, "The Song Remains the Same", is aptly titled, given their propensity for borrowing material from other artists.

The Donald...It's pretty clear that those who support "The Donald" for president are simply running on some kind of emotional autopilot.  Sadly though, being the leader of the free world probably isn't something that should be decided purely on the basis of emotion.  Saying that you're going to vote for "The Donald" because you're angry at Washington DC is a bit like saying you're going to stop eating entirely because McDonald's served you warm french fries.

The Real Pickle...It occurred to me that I'd have a heck of a tough time if the general election for President came down to Bernie Sanders and "The Donald".  That's a bit like having to decide between cancer or diabetes.  Not that Hillary Clinton is anywhere near a great choice either, but she does have the advantage of not making endless promises for everything and as well as simply not being an incompetent walking ego with hair.  Interestingly enough, I'll be in Florida on vacation when the election happens; we've already decided that we'll file a write-in ballot as every single vote will count in order to prevent the thrice married, four times bankruptcy declaring reality television star from becoming President.

Graduate Degree...I'm soon going to be 70% of the way done with my graduate degree.  I can't find the words to describe just how happy I will be when this is over.  It's tedious.  And time time-consuming.  At times frustrating.  In other words, it's probably worth it.

Speaking of Graduates...My youngest daughter "officially" graduated from Marywood University recently.  In addition to being, well, officially old, I am also extremely proud of her, as I am of all my children.  All will make the world a far better place.  Love You Stinky!

Back to Politics...Both parties are, to one degree or another, are built upon a fundamental lie.

Democrats - Want us to believe that government is the answer. To everything.  And that we should all be in labor unions, whether we want to or not (because big powerful institutions are always inherently good, right?).  Government is the answer when it comes to essential services and protecting us (from foreign powers and, sadly, from each other), and that's pretty much it.  Otherwise, it simply becomes this giant, impersonal, all-consuming thing that grows continuously larger without rhyme or reason.

Republicans - Want us to believe that somehow taking care of the wealthy and business interests will, almost by magic, make everything better for everyone else.  Sorry Cletus, but you and your relatives in rural Pennsyltucky have been sold a massive bill of goods.  We've had decades worth of practice when it comes to favoring the wealthy and business interests and nothing really to show for it, other than stagnant wages, spiraling executive pay and a tax code that favors those that make the most.

The real solution, in my estimations, is to scrap the two party system in this country.  We are, after all, one party away from a one party state.  Having multiple political parties will force greater compromise and alliances, something that's nearly impossible in the polarized region of the planet known as Washington DC.

Bathroom Bills...Speaking of ridiculous issues, there is far too much talk about manufactured bathroom issues.  For Pete's sake, if you look like a woman, than use the woman's rest room.  Ditto for males.  In fact, I'll take it one step further... 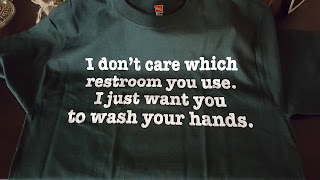 Enough...of the politics and other such stuff.  I started this posting on a musical note, so I'll end on one as well.  Ladies and gentlemen, Mr Vince Gill.

I love that song.

Created By Stephen Albert at 10:38 PM