I did something this past week that I've never done before:  Taken the first week in January off.  I know, hardly a *newsflash*, but it was a good idea never the less.

December was a difficult month.  As I've noted before, I had a lot going on at work, which coupled with finishing a graduate class on Information Technology and holiday preparations made for a storm-o-stress.  I am glad it is now part of the history books.

Now normally I only take longer stretches of time off maybe twice a year.  The rest of the time it's a day here or there, so taking this first week off was somewhat out of character.  I'll also confess to the following:  Often (as in more than about three quarters of the time) having a single day off is actually stressful for me.  I have grand plans on what I want to accomplish, but more often than not I'm either unmotivated and/or too tired to act on them, which makes me feel less than great.  I also typically end up checking work email as well.  Not good.

This past week was different.

I had an outline in my head of what I wanted to accomplish, but no real and firm plans.

I also made the conscious decision to not check email. Not once.  My cell phone number is on my away voicemail message, and I also let the others on my team know they can contact me if needed, so I figure that any real emergencies would come to me.  Otherwise, well it could wait.

The result was that I actually found this week to be relaxing.  I really feel better.  I also accomplished some stuff.  For example...home office storage.

One of things that we liked when we made the decision to buy our home is the fact that it had a second floor office.  It was just a bare room (well not technically correct, as it has its own covered porch), and rather small, but the space works well for us.

One problem has been storage.  Specifically, I have a TON of books, so after we bought the place I put up some shelving brackets just to create some additional book shelf space. 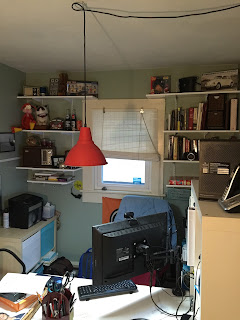 That worked for about 6 months, so it's been on my radar screen for a long time now to add shelving space. I planned out what I wanted, and with the help of a great stud sensor for plaster walls and about $175 worth of material, the shelving was upgraded. 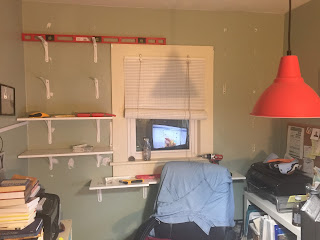 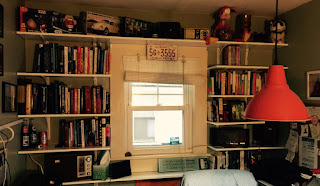 I also got in five days worth of workouts in the gym.  Granted that I continue to eat horribly, but I was glad at least for the 40+ minutes per day of dedicated exercise I got in Monday-Friday.

Alas now, it's Sunday evening, and work approaches quickly.  Time to say goodbye to an actually restful week off and check some work email.  The new week is coming, whether I am ready for it or now, but at least this time I feel somewhat better (mentally) prepared.


Created By Stephen Albert at 8:07 PM