Donald Trump's first TV ad shows migrants 'at the southern border,' but they're actually in Morocco 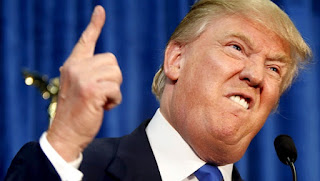 The above is worth five minutes of anyone's time.

Unexpected?  Not really.  Trump has never really been about facts or reality; no, his campaign is more about "the show" and pandering to the lowest common denominator of GOP primary voters than anything else.

Now I do get it:  Plenty of campaigns use stock footage in commercials.  But what Trump has done here is far more interesting in that the commercial is about inciting voters to be fearful, and the fact is that no amount of real footage, relative to this issue, can deliver what he needs.  So what's he to to?  See above...fake it.

Had he consulted with me, I personally would have suggested the following:


Anyway, the show must go on.

Here's my bottom line:  You can't have more than two functioning brain cells AND be a Donald Trump for President supporter.  Sorry.  You can't.

This isn't about Hillary Clinton, and I personally love it when people who, in the absence of any kind of factual basis for a rebuttal, somehow believe that an effective strategy is to simply change the subject.  I think that worked once...in third grade.

Oh, and I don't even like Hillary Clinton, for the record.

Created By Stephen Albert at 3:52 PM

Email ThisBlogThis!Share to TwitterShare to FacebookShare to Pinterest
Labels: Politics, The Donald