Scranton's Fiscal Pickle: The Heart of the Matter & 8 Recommendations

The following story from The Scranton Times...

...reminded me of something important relative to the fiscal plight of Scranton.  Specifically, saying that Scranton "needs revenue" in order to solve its fiscal problems is a bit like saying that a drunk "needs" just one more drink in order to feel better.

In point of fact, Scranton already has significant and regressive revenue sources in place.

Wage Tax
3.4% of earned income, one of the highest in Pennsylvania.  2.4% of this tax goes to the city government, with the remaining 1% going to the Scranton School District.  By way of comparison, here are a few other city wage tax rates:

You can read more about local tax rates HERE.

Business Privilege Tax
"Any for-profit, Scranton-based business that provides a service or receives payment for an exchange of talent must pay a business privilege tax at a rate of 6.13 mils, which amounts to $6.13 for every $1,000 of gross receipts. This is based on the previous year’s gross sales."  Citation HERE.

Note that these taxes (Business Privilege & Mercantile) are levied on gross receipts, not on profit, meaning that even if the business were to lose money it would still owe the tax.

I'm not going to add property taxes into the mix, mainly because it gets difficult to explain (since it is often times composed of taxes going to the city, county and school district).  Suffice to say, Scranton once had fairly low property taxes, but those days have long gone.  In fact, residents will likely be seeing a further increase in property taxes over the next year or so (see the article from The Scranton Times).

It comes down to this:  I don't think there is any amount of revenue that would solve Scranton's fiscal problems, simply because Scranton doesn't have a revenue problem.  Don't believe me?  Well why then do other cities of similar size manage to run their affairs with less in the way of tax revenue?

Simply put, Scranton has an expense problem.  It simply spends far more than it can reasonable ever expect to collect in taxes and fees.  What's more, the city is eventually going to run out of big assets to sell and/or leverage.  City residents have already been through the "sell stuff and it will all be better" charade in the past, and the net result has been where the city is now.

What to do?  The solutions are not easy, but they exist.  Here are mine.

A. First and foremost, the city needs to make it clear to all of its constituencies, including unionized city employees, that it is prepared to declare bankruptcy if it is unable to reduce expenses through structural changes to city operations.  And it has to be prepared to actually act on that intention, if needed.  Now the state politicians in Harrisburg may not allow Scranton to declare bankruptcy, but even if they don't they will impose fairly harsh measures in place of declaration.  Yes, bankruptcy will effectively destroy the city's ability to borrow, but that is already happening through a slow decline without the opportunities that bankruptcy would provide (such as opening up contracts).

B. Second, all employee compensation and benefit packages need to be open for discussion and potential adjustment.  The city should baseline salary and benefits against an average of similar sized municipalities in Pennsylvania.  The city must also become much more aggressive in evaluating disability claims made by city employees.  This process should be undertaken with the city leadership, union leadership and a neutral third party.

C. Third, mandatory manning clauses need to be open for discussion and potential adjustment.  City police and fire department staffing levels need to be evaluated on a comparative, per capita basis against similar Pennsylvania municipalities.  This process should be undertaken with the city leadership, union leadership and a neutral third party.

D. Fourth, the city needs to evaluate its overall organizational structure, including ratios of staff to managers.  With very rare exception, no manager should be supervising any fewer than five employees.  Departments with similar functions should be consolidated.  Common resources, such as supplies, should be centralized.  The city should look to consolidate some services, possibly such as Human Resources, procurement and information technology, with the Scranton School District.

E. Fifth, the city should engage in a partnership with the University of Scranton or other institution/group ("strategic partners") to undertake a "soup to nuts" evaluation of every service offered and provided by the city.  The evaluation would involve three steps:

1) Is this something that the city alone must provide in the first place?

2) If the answer to #1 is "no", then the city should seek out private business(es) to undertake the service for residents.  One that might be on the "no" list, for example, is refuse collection, as there are many private businesses that can collect refuse.  Scranton's current refuse collection system actually harms senior citizens and others that generate small amounts of garbage by charging them the same amount for refuse collection that large families pay (yes, your elderly grandmother and a family of 10 pay the same amount); words like "grossly inefficient" and "unfair" come to mind.

3) If the answer to #1 is "yes", then ascertain how efficient the service delivery is being performed and implement best practices to improve efficiency.  The strategic partners would help with the process.

F. Sixth, every expense needs to be justified, authorized and approved...including overtime.  All contracts need to undergo a competitive bidding process.

G. Seventh, a cost-benefit analysis should be completed for every open city position; unless the position serves to reduce expenses (such as a single new position that replaces two old positions), make city operations more efficient or directly and positively impacts public safety (within the framework of revised manning guidelines, see "Third") it should not be filled.  All approved vacancies should be publicly advertised.  The city should have strict anti-nepotism and ethics policies that preclude the hiring of relatives and all contributors to political campaigns of city council members and the mayor.

H. Finally, every budget every year for every department needs to be constructed from a baseline of zero (see zero-based budgeting).  This will force city leaders to focus on expenses on an on-going basis.  The budgeting process needs to include required city payments into pension and other long-term obligations (see "Second").  The city should financially reward employees who develop more efficient processes or find other ways to save money.  For example, provide a bonus equal to 10% of the first year realized savings to the employee.

Of course items B-H are null and void if the city actually has to declare bankruptcy.

When all is said and done, Scranton has been floundering for decades under a distressed city designation that will not go away until radical changes are made.  What I've seen and read over the years from city leaders have been far from radical. 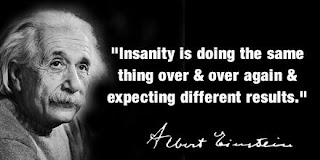 Created By Stephen Albert at 12:24 PM