There's so much death...

...it's as if you can't watch or read the news without hearing about about more people dying in senseless acts of violence somewhere.

So many questions that can't be easily answered, and yet it's those easy sound-byte answers that will fill the airwaves for yet another round of posturing by talking heads.

Enough of the violence.

No amount of arming or banning will solve our problems.  Rather, we've allowed our civil society to become remarkably uncivil.  It's no longer sufficient to disagree with someone like the President...now it's almost required, in many circles, to HATE him.  It's no longer sufficient to be anti-abortion...it's now required to HATE Planned Parenthood. 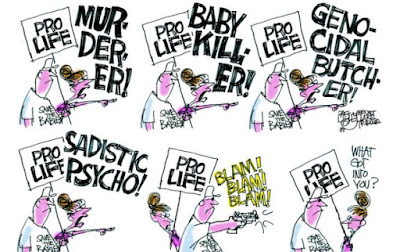 (cartoon from Pat Bagley...by the way, this was published 6 years ago)

I know, I'm singling out one side here, but so be it.  Just as Muslims have a special obligation to call out the extremists in their religion, so to do the reasonable folks on the political and social Right in this country.  For far too long far too many on the Right have accepted increasingly vile levels of rhetoric from the likes of folks like Rush Limbaugh to go unchallenged.  Rhetoric from people like Rush Limbaugh contribute...I would argue greatly...to the climate of hate that exists in this nation.

It's time, right now, to dial back the hateful rhetoric, whether it's spewed by a presidential candidate or some advocacy group.  Political Right or Political Left, it doesn't matter.  We can disagree without hating our opponents.  We can seek justice without out resorting vengeance.  We have to realize that the only way to stop killings is to stop killing.

We should protect ourselves, but we can't do that at the expense of senselessly harming others.  What good is our safety and security if it deprives someone else of theirs?