...and so this is Christmas

"And so this is Christmas, and what have you done?

Another year over, a new one just begun."

It's already December 21st, and yet it doesn't seem like Christmas.

Yes, a tree is up, and so are lights, but there's just so much else going on at the moment.  I'm struggling with an issue at work that I really had hoped would be resolved by now, but there are just some things that fall outside of our control.  In a way, it's a sort of cosmic reminder that we never really have things completely under control.  This particular issue is a kind of test package, if you will, for all that I've been working on low these past few years.  I speak specifically of trying to live in, and stay focused on, the moment.  It's a struggle, but yet I do see some progress in myself.  For that I am grateful.

We also had a death today in our work family.  I can't and won't try to do this truly nice person justice, other than to say that I had the privilege of occasionally working with her from time to time over the years.  That's a double edged sword of working for a single employer for such a long time:  I know, and have worked with, a lot of people, which means I see some leave...well before they should.  You can read a far better accounting of how this all has a deeper meaning in a posting on the blog "Lights Cancer Action!".  We are all ever so slightly diminished at work.

Now tactically I am ready for Christmas.  Gifts are secured and wrapped.  Holiday plans are made.  Guests have been invited, including Gary, my older brother's dog.  I just need to mentally catch up to the logistics.  Funny, it's usually the opposite:  I'm normally mentally there, just wanting for the logistics to catch up to me.

It all comes back to the concept of practice I  guess.

I've also been thinking about New Year's resolutions...also known the other 364 days of the year as simply "Goals".  More to come on that as the new year approaches.  I will share one goal now, seeing as though it has something of a more immediate impact: 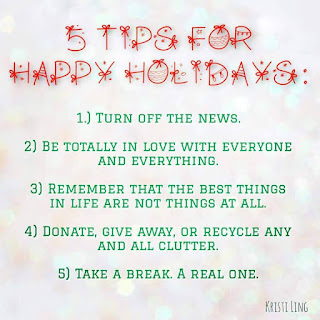 I can't do all of this throughout the entire Christmas/New Year's holiday, but I can try.  #1 will be especially difficult for me, but I can think of few more noble endeavors.

Created By Stephen Albert at 8:24 PM

Email ThisBlogThis!Share to TwitterShare to FacebookShare to Pinterest
Labels: Me (Professional), Me. Deep Thoughts, Music