Apparently you want to ban all Muslim travel to the United States because a very small percentage of Muslims do horrible things.  Fair enough.  In keeping with the precedent you are setting, I would like to make the following modest proposals myself.

Saudi Arabians - The 9/11 terrorists were from Saudi Arabia.  As a result I propose ending all military and economic cooperation with the Kingdom of Saudi Arabia.

Slovenians - According to the United States Department of State...

...given the potential for harm to U.S. interests, I suggest all Slovenians be put under immediate observation.  I suggest starting with your wife, Melania.

Israelis - There have been several documented instances of Israel working against U.S. interests and even putting U.S. lives at risk.  They include the case of convicted spy Jonathan Pollard and the attack by Israeli forces on the U.S.S. Liberty (which resulted in the deaths of 34 American servicemen; citation from Fox News HERE).  Attacking a U.S. ship and killing our servicemen should be an act of war.  I say let's declare it on Israel.  Now.

Conservative Christians - A real, all American terrorist organization we all know and love is the Klu Klux Klan.  Members of this group self identify as conservative Christians.  In fact, the director for the main KKK group actually identifies as a "pastor".  Given the very real harm the Klan has caused in the past, and continues to cause now, I suggest that all conservative Christians be put on a watch list.  You never know who might be under those Walmart sheets.


Thank you Mr Trump for trying to make America "great again" by keeping out all of those funny colored foreigners who don't even accept Jesus and won't gamble in your casinos (well the one's that haven't declared bankruptcy yet).

Post Script - The above is ridiculous, but millions of people aren't going to read it.  Sadly, the same is not true of Donald Trump. 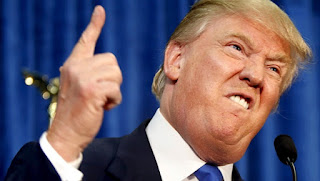 Created By Stephen Albert at 9:25 PM

Email ThisBlogThis!Share to TwitterShare to FacebookShare to Pinterest
Labels: Humor, Politics, The Donald