News of the Good...By this Sunday (December 13th) I will officially be 50% of the way towards completing my Master's degree.  It's a nice feeling.  2016 will be tough in that I'll have a few difficult classes to go, but it's all (mostly) down hill from here.

Bad News on the Doorstep...I feel saturated with news of death and violence.  It's like an evil fog that is floating everywhere.  Just when you think it couldn't get any more insane, well then Donald Trump says something else.  Speaking of lunatics...

Ted Nugent...says that the United States should be "cleansed" of liberals.  So say the author of such classics as Wango Tango and Cat Scratch Fever.  It reminds me of one simple fact:  The loonies on the Right are worse that the loonies on the left, mainly because they are better armed.  Also, when last I checked, bullets do more damage than organic granola bars.

That Moment...when you buy a new book only to discover that you already own that same book.

Speaking of Books...Now that I don't have to spend time during the week reading a textbook for school I can ramp up the leisure reading.  First up is to finish this book...


...which is a good thing, given that I had to order it from the publisher in the U.K.  Actually I am about 70% finished with it.  Highly recommended, although, again, very difficult to find.

Projects...I'm actually going to take a few months before my next graduate class to work on some projects around the house.  Two big ones in particular:  1) Ripping up the wallpaper and then painting in our half bathroom on the first floor and 2) Installing some serious shelving in the home office.  I simply have more books than I currently have room for books.  Not to mention a small radio collection.  And a Bill the Cat doll.  And a few other things.  There will be photographs. 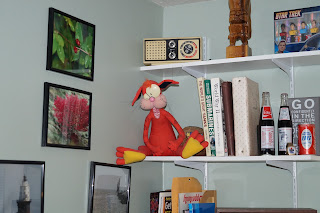 Cat Rescue...We rescued a cat in November.  It's kind of like a "kitty witness protection program" kind of deal, but suffice to say it was a cat that was in danger because he had been kicked out of his home by his "owner".  Now I have no designs on being a cat rancher, but few things boil my blood more than the abuse of animals.  Abuse, by the way, can come in many forms, including abandonment.  Anyway, our new addition, "Adolph", is doing very well.  Socialization with his fellow housemates JeanLuc and Tiger has been completed, and squabbles are minimal.  He's also been professionally groomed and treated by a good local veterinarian.   Tres gatos in the limit though.

Resolutions (also known as Goals)...I love New Year's resolutions.  I really do.  It's time to start thinking about them to boot.  I think I've done a lot of work in the mental health department this year, so maybe 2016 will be more focused on the physical end.

Muhammed Ali...made a statement recently about the the shootings and Islam.  It's worth reading (reference HERE), if for no other reason than the fact that Ali was, and will always be, champ of the world.


"I am a Muslim and there is nothing Islamic about killing innocent people in Paris, San Bernardino, or anywhere else in the world. True Muslims know that the ruthless violence of so called Islamic Jihadists goes against the very tenets of our religion.
We as Muslims have to stand up to those who use Islam to advance their own personal agenda. They have alienated many from learning about Islam. True Muslims know or should know that it goes against our religion to try and force Islam on anybody.
Speaking as someone who has never been accused of political correctness, I believe that our political leaders should use their position to bring understanding about the religion of Islam and clarify that these misguided murderers have perverted people's views on what Islam really is."
In the end, any and every religion can be perverted by evil folks as justification for what drives most bad human behavior, namely a lust for power.

Created By Stephen Albert at 7:11 AM