We Shall Over Comb...Remember when you were in grade school and there was this obnoxious, bragging rich kid in your class?  Well now he's all grown up and running for president.  Yes, "The Donald" is officially, well maybe, a presidential candidate.  That is until he quits.  Which he will.  Anyway, it's great fodder for more than a few cute Internet graphics. 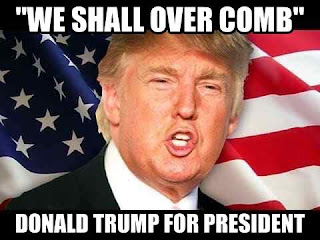 Allow me to  be blunt for just a moment:  If you actually feel that Donald Trump would make a good president, then I honestly believe that you may in fact suffer from some form of brain damage.  Donald Trump isn't a candidate...he's a punchline.  I'd vote for Rafael Cruz before I'd vote for Donald Trump.

By the way, don't just take my word for how much of a joke this is...here's what noted conservative Charles Krauthammer had to say about Donald Trump.

"  Appearing on Fox News’ “Special Report” Thursday, Krauthammer cited a recent poll of current and likely 2016 Republican candidates whom respondents said they would “never” vote for.
“It is led by Donald Trump, with a deserved 59 percent,” Krauthammer told host Bret Baier.  "
Citation HERE.  Note the key word "deserved".  In the world of Republican on Republican rhetoric that was a major "diss", and while I don't always agree with Charles Krauthammer, I do read his columns and for the most part I think he's a pretty level-headed guy.

Cousin Name Dropping Department...My cousin got an unexpected plug from none other than Mr Andy Palumbo in a recent blog posting of his; you can see it HERE.

Live Blog-O-Week...Yes, I was named "blog-o-week" by the Harold and the other good folks at NEPA Bloggers.  You can see the write-up HERE.  Trust me, this honor has nothing to do with quality of content.  Maybe they ran out of other people to name.  Anyway, thanks for the mention Harold!

Here's a Picture of My Cat...JeanLuc Albert, reacting to the Donald Trump announcement. 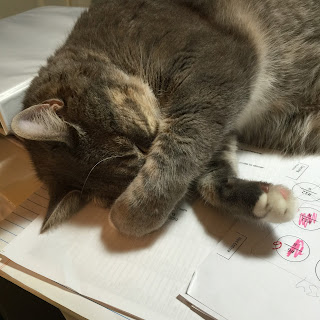 By the way, he's sitting on the draft/work in progress seating chart for the upcoming nuptials.  Perhaps he is bemoaning his lack of an invitation.  Anyway, as kitty credo goes, "if I fits, I sits".

I Hate My Mac...I really do.  Worst file management system in the world.  I know, I know, I need to spend more time learning how to use it, but it's just so un-intuitive.  Some things you can double click on; some things have an open button.  Some things you can't click on at all.  Some things you can drap and drop.  Some things can't be dragged and dropped.  Icons just happen to bounce from time to time.  It's not the virtually virus free platform some would have you belief.  Anyway, rant concluded.  Things were much easier back in the says of Windows XP.  Note that I equally hate Windows 8.

Diversity vs. Inclusion...As I've learned over the past few weeks, here's the difference between the concepts of "diversity" and "inclusion".

Diversity is being invited to the party.
Inclusion is being asked to dance.

For the record I hate parties and I am a horrible dander, but the analogy still seems to work never the less.

Speaking of Diversity...We have the case of the now former president of the Spokane chapter of the NAACP, Rachel Dolezal, and her claim to effectively be "black in spirit".  You can catch an interview with Ms Dolezal HERE.  I obviously don't know this lady, but something seems just, well, odd about the whole thing.  Some are making comparisons to the whole Bruce/Caitlyn Jenner change, but I'm not buying that one for a moment.  Why?  Well the previously mentioned Jenner has been pretty up front, it seems, with the notion of that "was born with a male body, but I know I am a female".  Ms Dolezal seems far more circumspect, and almost seems to have been hiding her birth racial identity.  There are deeper personal issues at play here with this young lady; here's to her being granted some peace.

You Can Follow Me on Twitter...I've had a Twitter account since I started this blog in 2008, but I never really used it.  Twitter just seems too hip for me.  Anyway, I decided that I don't have enough electronic distractions in my life, so I've actually fired the account up.  You can find me at Stephen Albert (@steve_albert) .

Created By Stephen Albert at 9:54 PM