How Religious Freedom Works in 2014

I've been trying to articulate my thoughts around a sense religious oppression that seems to exist in some quarters.  I haven't been very successful.  Then I saw this graphic and it all came together for me. 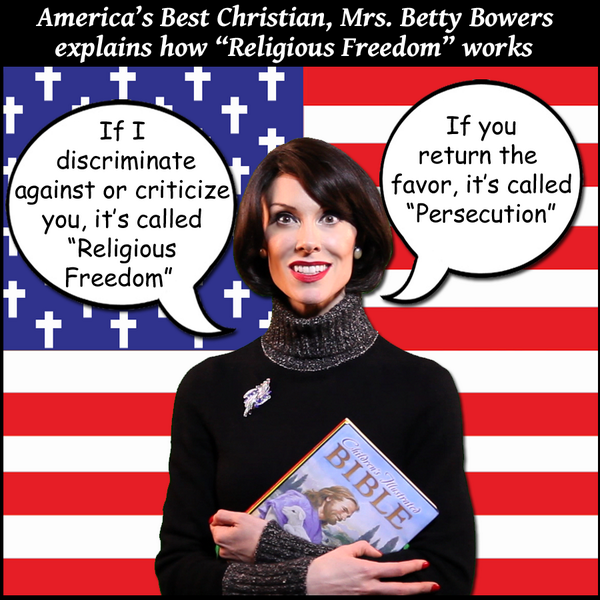 All the nonsensical complaining.

All of the fundraising disguised as whining.


Now let me be perfectly clear in one regard:  I do not believe that any religion should be forced to alter, change or modify any aspect of their creed simply because a government says so.  Well, within limits, and by "limits" I mean basically that no religion should advocate for the harming of children or animals.  Now if it involves consenting adults and it doesn't interfere with my life or yours, then more power to them.

Let's think about how this actually works.  In practice I don't think that conservative Christians should be required to accept same-sex marriage, in a religious context, by the government.  In reality though, for example, the Roman Catholic Church does not actually accepts many different types of marriages involving heterosexual couples anyway.  So no, the FBI will not be forcing priests to marry lesbians.  Sorry.  However, it seems that the converse is certainly not true, as many religious are trying to define the meaning of marriage from a civil context.  They can be slick about it, using words like "natural law" in their arguments, but it all ends up being the same point, simply that their religion is against same-sex marriage.

Let's take the discussion up a level.  There is a contingent in America's religious society today that feels threatened.  Why?  Because they once made the rules, and no one held them accountable.   Well that's not true, as they technically held themselves accountable.  Anyway, they could do and say whatever they wanted, hiding behind a one way mirror version of the First Amendment.  Note the key words "one way".  Now, it seems, elements of society have learned the same freedom that gives religious institutions an ability to criticize others also gives them the freedom to call out those same religious institutions as being sexist, racist, homophobic, etc.  The reaction by those religious institutions?  "Why it's persecution!"  I think that last phrase is code for "How dare they use our tactics against us!".

I realize that this plays out in some very subtle ways, and there is plenty of grey area to go around when it comes to how a concept like religious freedom becomes operationalized in a society.  At the end of the day though, while religion can claim a monopoly on the truth within the walls of its temples/churches/mosques/synagogues, that version of the truth ceases to exist at the building exit sign.  That's simply the way our American society was founded, period.  In the United States, religions don't get to make the civil rules.  That's for places like Saudi Arabia.  Has religion helped form our civil society?  It sure has, but "helped form" is different than "controlled by".

Speaking of forming and the role of religion in society, I know that there are many who want to claim that the United States is a Christian nation, but if that were truly the case, wouldn't the Constitution use the word "Christian" or "Christian Nation" at least once?  Wouldn't Jesus be mentioned at least once?  How about at least one reference to the "Bible"?  At best, our founding fathers left us with the words like "God" and "Creator" in our official founding documents as reminders of their mostly deist view of the universe.  As I understand it, many of the founding fathers had a basic distrust of organized religion, born in part out of experiences with state-sanctioned creeds in Europe.  History (both recent and not so recent) has shown the wisdom of their thinking in the separating of both church and state.  It's simply too bad though that some have a revisionist view of our nation's founding, used mostly as a fundraising tool, to claim that the founding fathers were a bunch of born-again conservative Christians.

Lastly we shouldn't forget the power of the almighty dollar.  A sense of persecution is the perfect fundraising fodder for the many religious groups out there in this day and age.  I've spent a few months listening to the local militant right-wing Catholic radio station, and the paranoia is inescapable, along with the appeals for money to fight "secular politicians and judges who want to take our freedoms away".  Again, it's as if there is legislation in front of Congress at this very moment that seeks to have the government name the next Pope.  It's borderline insanity when viewed from an objective perspective.  However, it's worth noting that "objective perspective" and "religious fundamentalism" are more or less mutually exclusive concepts.  Again, see theocracies such as Saudi Arabia and Iran.

At the end of the day, religious society in the United States needs to take a deep breath and ponder the following:

Created By Stephen Albert at 7:23 AM