Cold...as in "I have a".  Now I was also sick after getting a flu shot in early October.  My doctor tells me that the flu shot had nothing to do with my getting sick, and I believe him, but it was a pain the butt never the less.  Getting yet another cold/flu thing compounds the wretchedness.  In fairness just about everyone at work is sick, so it's not as if I am alone.

And so this WAS Christmas...For the record I had a wonderful holiday, and I do hope that all who are reading this did as well.  For me, it meant spending an all too brief amount of time with all three Albert girls together.  My cat enjoyed the time with them as well. 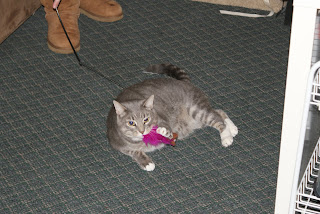 Christmas was followed by a few days off (well I confess to working most of the 28th), and then heading up to Rickett's Glen State Park for about two and a half days of cabin time with the wonderful extended family of Ms Rivers.  There was hiking, eating and reading.  A good mental re-set  if you will.  Part of the event was the annual "Grotto Party" on Sunday for Ms Rivers, who just happens to have a birthday on New Year's Day.  Being from the Scranton area, I find Grotto's pizza to be basically acceptable, but that's not the point.  The actual New Year's Eve celebrations were mostly held around a campfire...in the cold...telling stories of bold children from years past. 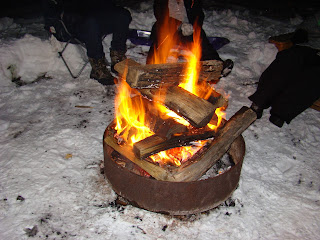 A splendid time was had by all.  The only down-side? 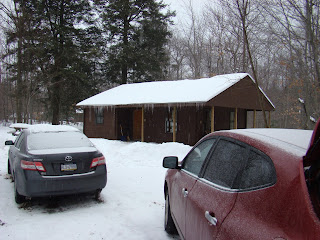 Climbing down the mountain in the snow (which actually wasn't all that bad, especially given my new mountain goat Rogue SUV).

Postings...I have had a bad habit of writing and then not posting.  I have several "ready to post" pieces sitting in a folder on my net-book desktop and two+ drafts sitting waiting for me to either hit the publish button or delete them.  The whole process is kind of interesting in a way:  sometimes I just get this thought that I just have to get out, and it just flows.  I may do a half dozen edit runs (and I still find typos later...) but by and large I get the idea, I write it from my head to my fingers to the screen, I edit and it gets posted.  Other times I have this idea, but I really struggle to get the words out.  Even when I'm done I just look it over and decide to let it just lay there, completed but never seen.  Rarely do I start a post and work on it in separate pieces.

Our Children...The older I get, the more I become convinced that my generation has done more harm to our children than any past by way of simple desire to make them "happy".  We have given them so much, yet we in all the having they are even less "happy" than generations past.  Why?  I suspect that it's in part because we so readily trade short term want for long term need.  For example, we set them up as teenagers with all manner of technology and convenience that they become accustomed to, yet when they are first out on their own, they struggle to maintain the lifestyle we have given them in younger years.  For the record, I am as guilty as the next.

Books...I promised myself that I would be reading one business book a month in 2013.  This is in addition to all the other work-related and pleasure reading that I do all the time.  So far I am in good shape, being mostly done reading Daniel Pink's Drive.  Next up is Goleman's Emotional Intelligence (for the record, I snagged the Get Abstract on E.I. already).  If you need to do a lot of business reading then you really should check out Get Abstract...think of it as being Cliff Notes for adults.

Weather...The good folks over at WNEP tell us that it's going to get up into the 50's over the next week or so.  Yup, global warming is just a "theory". Thanks Rush.

Created By Stephen Albert at 9:45 PM

Email ThisBlogThis!Share to TwitterShare to FacebookShare to Pinterest
Labels: C-S, Me, Me (Professional)