There were three votes against John Kerry's confirmation for Secretary of State; one of them was Texas Senator Ted Cruz.

Contrary to the shameful "swiftboating"accusations made against him, John Kerry's service was not only honorable, but he is a genuine war hero.  You can read an ACCURATE account of John Kerry's war service HERE (courtesy of Snopes.com).

Why did Ted Cruz vote against John Kerry's nomination?  Because, in part, he said that Kerry was not an ardent fan of the U.S. military.  Citation HERE.  Yes, the man who has never served is criticizing the war hero for not supporting the military.

If Ted Cruz is such a fan of the military, why didn't he volunteer to serve?

If John Kerry is such a foe of the military, why did he volunteer for service?  Why was he awarded three Purple Hearts, a Bronze Star and a Silver Star?

The answer is actually far more simple than it is complex:  Ted Cruz is the typical Chickenhawk. 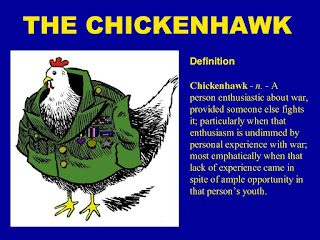 Created By Stephen Albert at 8:25 PM