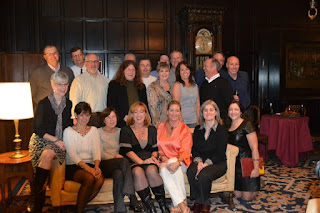 "And did they get you trade
Your heroes for ghosts?"
(Pink Floyd, Wish You Were Here)

I have this strong urge to avoid writing that which is expected.  I don't know why.  It's not as if I'm some rebel without a cause (or a clue).  For whatever reason I'll get suggestions about a topic or I'll read something somewhere and immediately think "that's a great topic" but then another thought creeps in, that of "yeah, pretty predictable", and the idea fades.  Witness the 6 Scranton Times articles that were sitting in a basket at my desk at home...all good ideas...all ending up in the recycling bin after a cleaning binge with the accompanying acknowledgment that they represent 6 blog postings that simply were never going to happen.

Am I stalling enough?

Okay, I suspect I should get to the point.  Last Saturday night was my 30th high school reunion.  Yes, I said "30", which makes me "old" (times like this I hear Butthead giggling in my head just saying "hehehe, he's old").  Anyway, Despite it being something of a milestone event, kinda, I've resisted the urge to even mention it.  In fact, I wasn't going to even mention it here until about 10 minutes ago when the thought just occurred to me that it's pretty pathetic to not at least broach the subject.

Why am I stalling?

It was a nice evening.  Ms Rivers was very kind in really wanting to accompany me, so much so that she had to arrange childcare and the like to be at my side.  You know someone is close to you when they just instinctively know when something is important to you, even if you don't say the words "this is important to me".  On some level this reunion was important to me.  Important not so much because I was able to meet old friends again, as truth be told, I didn't actually have that many friends in high school (or dates for that matter).  No, this was important I think because in high school I never quite felt like I belonged.  Not the most original thought when it comes to the high school experience, I know, but it was even more so prevalent for me.  Why?  The reasons were legion (sly reference to the Gospel of Luke...it was a Catholic high school after all), but part of it was that I was that rare kid who transferred in to a Catholic high school from the public school system.  The flow was usually in the opposite direction.  Also, growing up we were genuinely not well off financially (something I've written about before), something also relatively uncommon among my peers.

The overall equation breaks down to something like this:

As I said, I didn't really fit in.  I didn't feel like I deserved to be there.  It was not the best of experiences, and over the years I've often wondered if I made a mistake by going to Bishop Hannan.  Did I mention, by the way, that this was a choice on my part?  This wasn't something my mother wanted us (myself and two of my brothers) to do...we volunteered for the effort.  In some kid of bizarre way though the thought never, at the time, occurred to me to transfer back out to a public school.

None of the above, by the way, should be taken as an aspersion against my fellow 1982 classmates.  At the time they were typical teenagers, even if I wasn't.  I did call some of them friend, and I am glad to be connected to them via Facebook now.  During the reunion every single one of them I spoke to was nothing short of incredibly gracious and friendly.  We talked of jobs, relationships (both failed and new...), kids and changing times.  I'm still not much of a social butterfly but I had a very good time on Saturday night.

Most importantly though?  Probably for the first time I felt like I fit in.  Took 30 years, but I felt like I belonged.  I had more shared experiences than uniqueness's with my peers.  This has everything to do with me and virtually nothing to do with them, but it's a grand feeling never the less.  I think this is a great example of what T.S. Eliot meant when it wrote (to paraphrase) "...arriving at the place you started and knowing it for the very first time".
Created By Stephen Albert at 7:58 AM