My questions for Siri 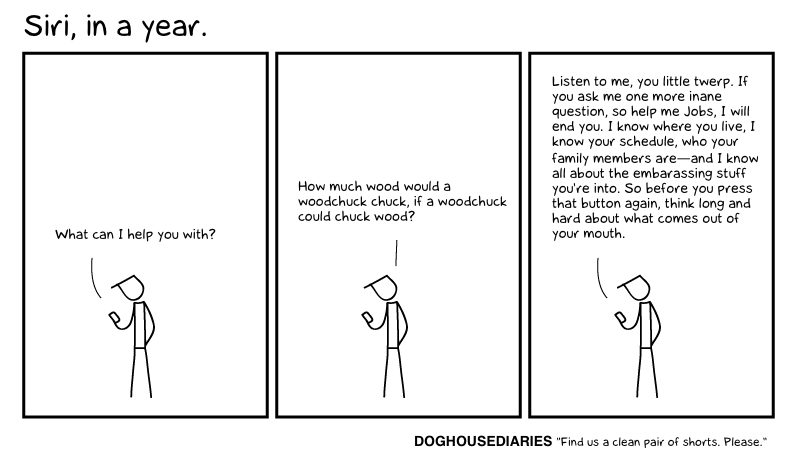 Folks that know me will tell you that I am not a fan of Apple's products, for a variety of reasons (vertical integration, over-priced, etc.).  That noted, I find the Siri application fascinating.  Here is a question I would be asking Siri, if I had access to "her".


Siri, is Steve Jobs now being tormented in Hell by the souls of all those Foxconn workers who committed suicide after making Apple products?
Of course that Apple probably has built Siri to avoid any Steve Jobs questions.  They are a crafty bunch.  So just in case I could go with something like...
Siri, how can I too become a 20/30's tree-hugging hippster who unknowingly supports unbridled corporate greed?
I love how ironic it is that so many of Apple's product users would tell you directly that they oppose things like, well, the working conditions at Asian factories (you know, the kinds of places that produce Apple products).  Of course they are actually paying to support the very things that they tell you they oppose in this arena.  For the record I work in the private sector and I have no problem with corporate profits.  I also don't have any Apple products.
Hey, how many Democratic party operatives and field workers have Apple products?  I bet dollars to donuts that the iPhone is probably the "tech de jour" for this crowd.  Priceless! Republicans?  They seem more like the Blackberry crowd to me.
Now I know that I'm not completely innocent in this area because some of the technology I own was no doubt created by over-worked pre-teen girls in Chinese factories.  Point well taken. In point of fact though while I find some of Apple's labor practices bad, I find hypocrisy even worse.  You know, the hypocrisy of  (for example) criticizing capitalism while drooling like Pavlov's dog at the mere mention of the next "iTrinket".

Fight the power!
Created By Stephen Albert at 8:05 PM

Email ThisBlogThis!Share to TwitterShare to FacebookShare to Pinterest
Labels: Technology