Maine 2022: Hope is the thing with feathers

Starting yesterday, and continuing through the end of next week, it's officially vacation time.  As in a real, multi-day, have to travel somewhere and interact with other humans vacation.  The specifics of this particular vacation center around my in-law's 61st wedding anniversary, and involve Ms. Rivers's family gathering in Maine, as that is where the senior Mr. & Mrs. Rivers had their honeymoon, many moons ago.  This was a trip that was postponed from a prior year (a 60th wedding anniversary trip seems to make a bit more sense, don't you think?), mostly on account of the 'rona*, which was a reasonable thing to do, all things considered.

This is, by the way, my third trip to Maine over the years.  One of the wonderful things about being married to Ms. Rivers is that, sans her involvement, I am reasonably sure I would never have gone to Maine in my lifetime,   That prior statement only makes sense if, for example, you've actually been to  Maine. 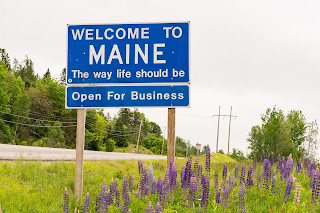 As I've written here before, I consider Maine to be a different kind of place.  The coastline is nothing short of awe-inspiringly beautiful, but over and above that, there's just something uniquely Maine-ly about Maine.  It's as if there's a different set of mental rules here...a different reality of sorts...that you can only understand if you've actually spent time in Maine.  It's a feeling that is pretty hard to put into words, and pictures only do it a kind of somewhat justice.  Speaking of pictures, there will be many over the next few days.  I may even plug some into a posting or three.

I know that's standard fare to say things like "I really need this vacation" when you are writing about vacation, and while I like to pride myself on the fact that I am reasonably good at writing things down, the reality is that I  really do think I need this time off.  There has been just so very, very much that has been fundamentally changing.  By that, I mean changes in the world, so many career changes for me over the past two years, changes in health, et al.  Through it all I have been doing what I think I do best:  Plowing through.  Yet, I suspect that even the best actual farm plow gets dull after too much usage and needs some kind of sharpening.  For me?  See Maine, above.

“Hope” is the thing with feathers -
That perches in the soul -
And sings the tune without the words -
And never stops - at all -
And sweetest - in the Gale - is heard -
And sore must be the storm -
That could abash the little Bird
That kept so many warm -
I’ve heard it in the chillest land -
And on the strangest Sea -
Yet - never - in Extremity,
It asked a crumb - of me.
(Emily Dickinson)

I've learned that hope is pretty much a useless kind of thing when viewed just by itself.  Where it has any real value in our lives is when it's coupled with some action.  See Maine, above.

So, what does all of this really, truly mean?  Well, seeing as though I started writing this at 6:02am in Portsmouth, New Hampshire (and it's now 6:33am), I'm not sure I can say.  As much as I haven't been writing much lately, sometimes the words just come out on their own without any real effort from me.  That's the case now.  This post is basically just writing itself; I'm just here to edit.

On that note, it's time to move on to other things.  There will be more to come.

(*) COVID-19 for the more sophisticated types out there.

Created By Stephen Albert at 6:48 AM