I can't think of a more compelling title, so I'm going with simply "Why", that is until something better comes up.  There probably is a good reason for the title, by the way, but the bigger question is this:  Is it worth sharing?  I know, cryptic stuff makes for bad writing, so I'll stop.  For now.
Anyway, today had been planned as a day trip to what could best be described as an "artists island", but that didn't pan out, mostly on account of the fact that we could get ferry tickets to the island, but getting ferry tickets back wasn't possible.  And it's too far to swim.  Artist island being off the table, there was a replacement in the form of a visit to Port Clyde, a lighthouse, and a cemetery (in that order).
Tackling that itinerary LIFO* order, the cemetery trip was to find some deceased Rivers clan members, along with accompanying members of the Davis family (who, I am told, are connected to the Rivers family by marriage...make that many marriages...apparently).  It was hot work, but several Rivers and Davis folk were found, and photos were taken for future genealogical reference.  Or to just help the next person not spend an hour looking for lichen-encrusted tombstones.  A sample is noted below. 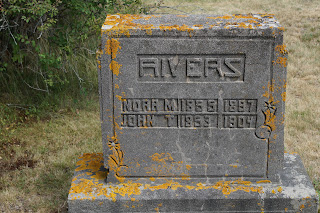 It was nice helping Ms. Rivers with this most family of tasks.
Side note:  While this part of Maine is something of an ancestral home of Rivers (and Davis), apparently, there are no above-ground Rivers to be found in these parts.
The Marshall Point lighthouse, working backward on my original list, was actually very nice.  A few photographs below provide some evidence of this fact. 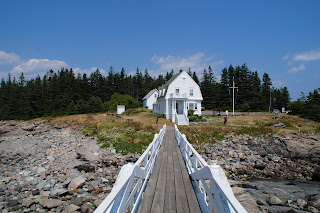 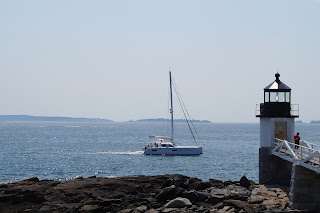 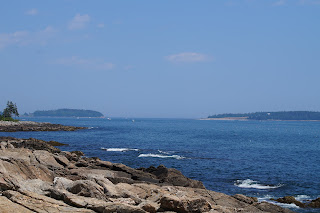 Our first stop was Port Clyde itself, where lunch was had at the Port Clyde General Store.  This place looks exactly like what one would expect from a "Port Clyde, Maine, General Store".  The proof is as follows: 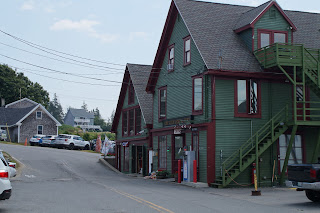 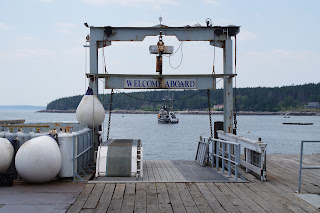 Rounding out the day was a lobster dinner at our compound.  What I'll say about that is the following..." I am sure it was well prepared".  That last quote is my standard response to virtually any food that I will not eat, and lobsters are definitely on that list.  I will note that I have tried lobster, and I found it to be basically just rubbery, with a fishy taste.  Again, no slight intented against the cooks, but it's just not my bag.
"I only extrovert when I am paid."
The above quote gets to the title of this posting.  I'll admit to a certain feeling of being disconnected at family gatherings.  That's 100% me, and 0% everyone else.  This just wasn't something we did a lot of in my own family growing up, so I think there's a part of me that just doesn't know what to do.  Now part of me thinks that's a pretty asinine thing for a 58-year-old to admit (and/or write), but I've always tried to be honest and real in these writings over the past 14 years, so I'm going to stick with my guns here and keep going.
"I only extrovert when I am paid." was my response once to someone who, at work, was shocked when I told them that am basically pretty introverted.  This shock comes from the fact that, over my many years in the professional workforce, much of my work has centered around teaching adults things.  Part of that, I will bluntly state, involves entertaining people.  Simply put, no one is going to listen to, let alone learn anything from someone who is about as engaging as a wad of chewing gum.  While I wouldn't use the word "engaging" to describe my professional work, I will say this:  I know how to make boring stuff seem interesting; see "entertaining people".
To tie this all together, I choose not to be my work self when I am on vacation.  Part of me thinks that I should, but that would require work, which would then be in defiance of what a vacation is supposed to stand for in the first place.  It is, in a sense, a very real "catch-22":  I feel somewhat disconnected, but I also fight the urge to be entertaining or engaging as I would at work.  What's left?  A very uneasy kind of mental truce that can sometimes be difficult to navigate.  That navigation seemed more difficult today than it did on other days this week, for reasons I just can't explain.
Lastly, all of the above isn't intended to endear sympathy or even understanding from anyone; it's just me being honest, with both myself and the world.  In the final analysis, I think the world has something of an honesty deficit these days, as the complexity of our lives can make discerning fact from fiction increasingly more difficult.  Score another victory for the clarity that Maine has to offer.
(*) In case you forgot your Accounting 101 lessons, that would be "Last In, First Out".
Created By Stephen Albert at 10:15 PM

I enjoyed your honesty and the walk through Maine. Beautiful