In addition to the 19 or so humans with us during our week in Maine are two dogs, Blue and Laya... 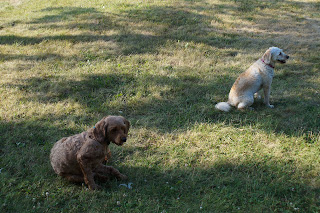 ...who came with Ms. Rivers' sister.
These are wonderful dogs by the way.  Well, most dogs are wonderful.  In fact, as I've noted before, most dogs are better than most people.  That's about a 50% indictment of bad-actor humans and a 50% endorsement of dogs.  In fact, I'll even blame bad-acting dogs on crappy human owners.  All this noted I'll never own a dog.  Growing up we had a dog (Choo-Choo, who was a beagle/dachshund who I am told smelled), and while that was enjoyable enough, it's just not for me.  I recognize that I'm not a good enough human to own a dog.  Unlike many actual dog owners.
Back to Maine.
We're staying at a rather large rental that sleeps in excess of 20 people, split between a large building and a smaller cottage.  All told a nice place.  It did come with something of an "October Suprise" in the form of a message from the property owners, who basically said, "hey, we're being sued by our neighbors, so if you be on your best behavior, well, that would be appreciated".  For the record, we are nothing if not a well-behaved group.
The good news is that the above message from the owner is far worse than the reality of this place, so no complaints (so far...).  I think that Maine is the kind of place where people basically just leave others alone.  That's a far better concept than that of New Hampshire's "Live Free or Die", which doesn't leave someone with much in the way of options.
As I start to write this (at 7:55am) it's kind of damp here in Cushing, which is understandable given the rain, mist, fog, and 180% humidity.  There's a kind of beauty in all of this and is yet another example (as referenced in the last posting) of how Maine has its own way of thinking about things, giving us the gift of perspective.
Today's plans include a trip to Augusta, where my younger stepson will meet a friend of his and I will, hopefully, find that Holy Gail of sneakers, namely a decent pair of Rockports.  Seeing as though I probably have less than 5 millimeters worth of sole left in my sneakers. Being in Maine you would think that finding sneakers that are kinda-sorta associated with Maine would be relatively easy, but that's not been the case.  Hopefully, as we travel to the actual Rockport (Maine), my quest will yield some results.
On that note, it's time to end this screen.  I'll pick things up later.
It's now a hair bit after 10pm, and I am tired.  Today's jaunt included a trip to Augusta, the capital of Maine.  I will note "in all of its 16,000 inhabitants glory".  I think that last sentence speaks for itself.  The trip itself was not motivated by a desire for sightseeing, as there literally is not much to see in Augusta, but rather because my younger stepson has a friend in the area that he wanted to spend some time with.  Augusta just seemed to be the most logical place to visit.  Anyway, and as something of an update to this morning's screed, I did find a pair of sneakers, all be it not Rockports.
Regarding that last sentence, I can say with a bit of astonishment that, in actually buying new sneakers in Augusta, Maine, something unique happened:  I actually visited a shoe store that, gasp, didn't include vast stacks of shows followed by implicit directions of "fend for yourselves customers".  Yes, for the first time in something like 40 years, I actually got my feet measured (a bit over 12.5, and between EE and EEE in width) and got what seemed like the concierge shoe service.  I ended up not buying Rockports (apparently the company went bankrupt or some other terrible thing), but I did find a higher-end sneaker that fits and is comfortable.  Maine, it seems, was not going to disappoint...at least in the shoe department.
The rest of the day has been more or less laid back and included a 1-year-old's birthday party.
Some additional photos from the day included those from a morning walk... 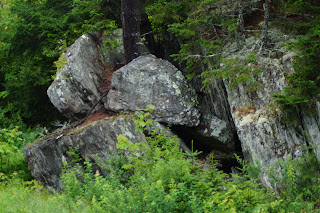 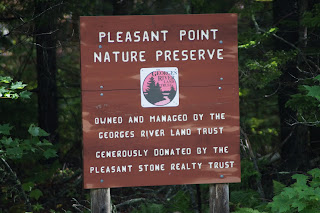 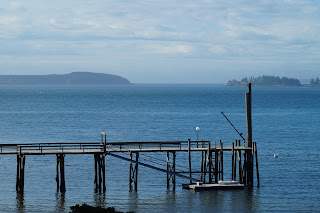 ...and a set of spectacular sunset photos; one shown below... 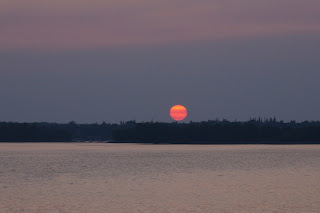 As for tomorrow, well it's a bit of an open book.  This is not the worst thing in the world.
Created By Stephen Albert at 10:21 PM